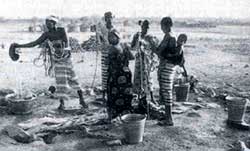 THE EARTH Summit was over three months ago, but its decisions may already be coming apart. Africa's victory in securing support for the negotiation of a desertification convention may have been run into the sand, says a Panos Institute report.

Even if the next session of the UN General Assembly supports a recommendation of the UN Conference on Environment and Development and gives the go-ahead for drawing up of an overall agreement, the evident reluctance of Northern governments puts a damper on the prospects. Commenting on this issue, the publication Africa Confidential said, "The desertification initiative lacks enthusiastic international support and still could get lost in a bureaucratic morass."

Both USA and the European Community appear to be supporting the convention -- Africa's main demand at the Rio summit -- only as a bargaining chip in their moves to obtain a forest agreement. Indeed, desertification had to be forced onto the agenda by concerted African action, after it had been almost completely overlooked during pre-summit preparatory meetings.

The precedent for action on desertification is not good: The existing Plan of Action for desertification, agreed in 1977 and supervised by the UN Environment Programme (UNEP), has collapsed because of a lack of funds. UNEP deputy director P Darmhofer confirms, "We are very worried about lack of funds. But, if governments and people in affected countries show they take it seriously, donor countries are more likely to come up with money." But past experience has shown that some governments paid mere lip-service on this issue.

The Rio text complicated matters further by confusing drought and desertification, which are two entirely separate phenomena. If care is not taken, convention negotiations could shift towards drought relief and away from desertification. The latter's definition, though subject to continuing controversy, implies loss of drylands productivity as a result of human acitivity, rather than climatic impact.

Using the word 'desertification', suggested Darmhofar, arouses images of creeping sand and this has been not only counter-productive but may also account for some of the loss of international interest. The edges of the Sahara respond to climatic variations, and not to deserts, which are not the problem, because few people live in them: "I try to get away from the picture of sand dunes."

Ulf Hellden, a geographer at Sweden's Lund University, says that "the very few satellite-based studies that have been carried out have neither been able to verify a systematically growing Sahara desert, nor any long-term decrease of biomass productivity around Sahelian villages and water holes." He warns that desertification could become "a political and development fiction rather than a developement fact."

The real issue is not changes at the edges of deserts, but the livelihoods of the estimated 900 million people affected by land degradation in dryland areas. Says Jirri Skoupy, senior officer in UNEP's desertification programme: "It makes no difference what you call it, but what you do with this problem. If we don't invest now to control land degradation, in 10 or 20 years we will need three times as much money, because it is going on rapidly and there is no commitment to stopping it or even keeping it under control."

Skoupy's comment was made before the Rio summit, and the go-ahead for a convention negotiating process appears to back up his concern. But a more realistic assessment of current political attitudes is probably offered by the London-based International Institute for Environment and Development, which describes the recommendation as a "sop" to African countries and dismisses the idea as "surely a non-starter".