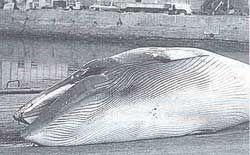 DESPITE the International Whaling Commission turning down in May a request by Norway and Japan to lift its ban on whaling, Norway has announced its intention to resume commercial whaling soon (Down To Earth, June 15, 1993).

Responding to the IWC decision, Norwegian Prime Minister Gro Harlem Brundtland said it had undermined IWC's credibility as a natural resource management organisation. Foreign minister Johan Jorgen Holst contended whaling is about "the rights of a coastal nation to make use of available resources". And, Norway's fisheries minister Jan Henry Olsen added that unless the growth of minke whale stocks was controlled, they would consume fish on which endangered species depend for food.

Japan also complained that the IWC had become "a body to protect the rights of whales" and had ignored a scientific report that said there was no reason to restrict whaling.

Criticising Norway's stand, European Community environment commissioner Yannis Paleokrasas said, "We have international laws and regulations and these should be observed by everybody concerned." Resumption of whaling would hinder Norway's bid to join the EC, he added.
Arrogant disregard Environmentalists, too, have flayed Norway for its decision and a Greenpeace spokesperson said, "Brundtland is buying votes with dead whales. This arrogant disregard for world opinion will cost Norway far more than it can ever gain." The World Wide Fund for Nature also criticised Norway, saying its "unilateral action in defiance of the world community is unacceptable".