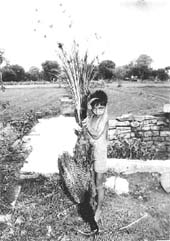 more means peacock in Hindi. Morena, a district in Madhya Pradesh known for its large population of peacocks, gets its name after the national bird. When about 77 birds died in Maharajpura and Sitapur villages of the district after they had consumed pesticide-laced grains of bajra (pearl millet), the national media took note of the pesticide menace. Amplifying the irony of the situation was the fact that the incident occurred just before the onset of the monsoon rains, which are traditionally symbo-lised in Indian arts by the image of a dancing peacock.

"Peacocks are forced to come into human-inhabited areas to get food as they cannot find food in the wild," said D Kanungo, director of the Central Insecticides Board in Faridabad, Haryana. Rajat Bhargava, ornithologist at the Aligarh Muslim University's Centre for Wildlife, agrees: "This is a lean season. Wheat and maize have been harvested and there is not much grain available for the birds.It is indeed very unfortunate that the peacocks have eaten such large quantities of bajra due to non-availability of other grains. Also in this case the bajra may have been freshly sown." Kanungo explains that the bajra grains meant for sowing are sprayed with chemicals to prevent them from being eaten by white ants. But, if food is scarce for the birds, they dig the ground and eat the grains, ingesting the poison in the bargain, Kanungo observed.

Pramod Agarwal, the district collector, said viscera reports pinned the cause of the bird deaths down to sprayed bajra grains. A P Gupta, district veterinary officer, said the pesticides affected the breathing and digestive systems of the peacocks. Pesticides can enter the food chain through a number of ways including water, air and through direct consumption, as a part of the food we eat. They can cause severe damage to the development of a bird's nervous and respiratory systems, interfering with the production of hormones, leading to disruption of the reproduction functions and faulty embryonic development, among several other problems. "Pesticides can also cause sterility in birds. The eggshell of such birds becomes very thin and ruptures prematurely. This leads to birth of dead offspring and the overall population of the birds tends to decline," explains Bhargava.

"Public attention is brought to such issues only when people or animals drop dead. But if people are chronically disabled or when malformed babies are born, then it is not seen as health problem because of pesticides," says Mira Shiva, head of policy research at the Voluntary Health Association of India. "Enough attention is not paid to the medical fallout of chemical pesticides. People do not know about the antidotes to poisoning due to pesticide, especially the poor people," she adds.

The news is very alarming in view of Bhargava's observation that the peacock is at the apex of the food chain and is, hence, a very good indicator of ecological health. "It is not just peacocks, the effects of pesticides can be seen on several other bird species. There is an overall decline (in populations) - if not directly then over the generations. It is high time we carried out comprehensive studies on the effects of pesticides," he reckons.