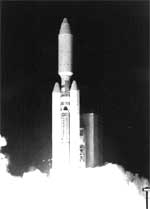 the launch of Cassini, which will visit Saturn, is another major event in space exploration in this decade. The probe, part of a project that began almost 13 years ago, took off on October 13, 1997, and will reach Saturn in about seven years. Its mission: getting detailed information about the planet and its satellites. The spacecraft will spend four years orbiting Saturn.

Named after 17th century Italian astronomer Giovanni Cassini, who first discovered and named Saturn's mysterious moon Iapetus, Cassini is the last of the large multi-purpose probes that were launched in the 1980s. Unlike other large spacecraft previously launched