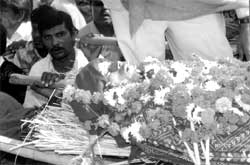 HERE is something for those who would not believe that the wars of this century will be fought over water-related issues. Three people died and 20 were injured on December 14 in Falla village, 28 km from Jamnagar town of Gujarat, when the police opened fire on a mob of about 300 people from the neighbouring rural area. The people had gathered to protest against the state government's decision to reserve water from the nearby Kankavati Dam for Jamnagar town - a decision favouring urban people at the cost of rural folk. The dam has become the only source of water for about 60 villages near Falla, and has very little water. This year, the rainfall recorded in this area was 148 millimetres (mm), compared to the annual average of 550 mm. People of the area point out that the groundwater has become saline due to overextraction (see p30: Standing the test of drought ).

But the most worrying part of the situation in Saurashtra region of the state is that summer is a good four months away, and nobody seems to have a clue as to how the administration will deal with water scarcity when the problem is unmanageable in the winter. Already, 14 villages including Hadiyana, Limbuda and Jodiya are being supplied water from the dam by tankers.

On December 20, more than 15,000 farmers assembled in Falla to condemn the deaths. The meet was called by the Bharatiya Kisan Sangh ( bks ), a farmers' association that joined the agitation nine days after people of Falla decided to begin a protest fast on December 2.

The bks is affiliated to the Bharatiya Janata Party ( bjp ), which is in power both at the Centre and in the state. The bks leaders blamed the state government for taking a wrong decision favouring Jamnagar town, while ignoring the villagers need for drinking water. After the incident, the state government has reversed its decision and will reserve the water for the villages. "The decision has come only after a great loss to our village. We never knew that we will have to sacrifice three lives to ensure that we get drinking water for the water-scarce villages near the dam," said Veljibhai Dhamsania, vice-president of the Falla gram panchayat (village council), who has been at the forefront of the movement against the government decision.
Reeling under a drought "After two months, when the water in the dam is finished, even Falla may face a severe water crisis. For the villages here, there is no other source of drinking water for the next six months," said Jethalal R Aghera, president of the Jodiya block panchayat in Jamnagar district. "This year, the demand is not for irrigation water but for drinking water. We know that the water in the dam is not enough to even meet our drinking water needs," said R Kanani, former vice-president of the Falla village council. "We are surviving only by God's grace. If there are no rains next year, we will have to migrate from the village," said Dhamsania.

"Several governments came to power. Several water projects were formulated. But the water scarcity in the region has only been getting worse," said Gokulbhai Patel, president of the district unit of bks . The people of Falla complain that none of the parties that came to power in the past 20 years have taken the water problem seriously and that the government only talks about bringing water from the Narmada dam project.

While the administration is supplying drinking water by tankers, other uses of water like irrigation have taken a backseat. "Tankers can only supply drinking water. But from where will we get water for cattle and irrigation?" asks a resident of Falla.
A political opportunity The residents of the area as well as the district administration blame politicians for the unfortunate turn of events. "This conflagration is a result of the conflicts among leaders of the bjp . Parmanand Khattar, the state's urban development minister, was trying to get water for Jamnagar town which he represents. On the other hand, the minister in charge of Jamnagar district, Murubhai Bera, and Chimanbhai Sapadia, the road and building minister ( panchayat department), have been trying to get the water for the villages," Dhamsania observed.

Those in touch with the politics of the district and the state point out that Khattar had his eyes set on the forthcoming corporate elections, and wanted to get the maximum mileage for his candidates.Sapadia and Bera, on the other hand, had been trying to win the confidence of the rural folk to better the chances of their candidates in the approaching panchayat elections for the village, block and district level. People of Falla also blame Narottam Patel, the state's water resources minister, for not taking a timely decision.

"They were consolidating their vote banks, and I lost my son," rued Raghavji Parshottam, 46. His 21-year-old son, Kamlesh Raghavjibhai, was killed in the police firing. Several officials of the Jamnagar district administration also believe that politicians are trying to take advantage of the situation and are hardly bothered about the core issue of water. They agree that the main fight is between bjp politicians who are thinking about the coming panchayat elections. "There are no clear-cut instructions from the government to the district administration about how the issue should be tackled. Unless there is a political will to solve these problems, they will continue. But politicians are hardly concerned," says a senior official, asking not to be named. "I think that in March-April 2000, there will be more water riots in the district and other parts of Saurashtra region," says another official.

But is the district administration without blame? Says Dhamsania: "When we went to the district magistrate, he told us that the government has decided to supply water to the villages through tankers. We asked him what would be the source of the water when water from the dam is supplied to the town. He said there is no alternative. Moreover, the administration made false statements in the press that we had stopped a gas tanker and were trying to overturn it. We know how dangerous it is to overturn and burn a gas tanker; it can destroy the entire village. We have more than 200 gas connections in the village. We are not morons."

The administration, however, is not accepting the responsibility for the police firing on December 14. "The police opened fire in self defence. They did not seek any orders from us," said Girish Murmu, district magistrate of Jamnagar. The government has ordered an enquiry by a retired judge.

The unrest in Rajkot
A senior district administration official in Rajkot said water scarcity is likely to pose a serious law and order problem. C J Ruparelia, chief engineer of the Gujarat Water Supply and Sewerage Board pointed out that Rajkot town is being supplied drinking water for 20 minutes in two days.

Sudhir Joshi, a Rajkot-based leader of the Congress, said, "Come February-March and water riots are bound to take place across Saurashtra. Right now, the unrest is not so apparent as the bks (which is at the centre of the struggle in Falla) is affiliated to the bjp . "The people of several villages such as Alamtra, Gauridad, Mitana and Bedi have punctured the pipeline coming from Wankaner to Rajkot," he pointed out. A district administration official confirmed this.

However, Vijay Anadkat, deputy executive engineer, Rajkot municipal corporation, denied these reports, saying that the breaches had to do with technical snags. He pointed out that the administration was digging borewells as deep as 1,800 feet (about 550 metres) in the catchment basins of Aji, Nyari and Lalpari dams. "We also buy water from privately-owned bores that still have water," said Ashwini Kumar, sub-divisional magistrate, Rajkot. "Had it not rained in October in Rajkot, we would have had to invest about Rs 6 crore for providing drinking water through tankers in the city," said Anadkat.

The present drought has made it clear to the people that the only long-term solution to the water crisis lies in rainwater harvesting and watershed management. The people of Falla pointed out that they have recently demanded the construction of five check dams in the village to stop rainwater. Kunwarjibhai Yadav, national president of the BKS , said the association is planning to take up watershed development projects on its own, without seeking the government's assistance, concluding: "We have to catch water right where it falls."