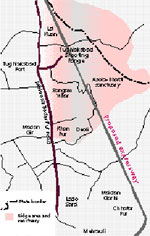 the bug of big projects has now bitten the Delhi government. In tandem with Prime Minister H D Deve Gowda's anti-environmental crusade, the Delhi government is planning an 80 km-long ring road along the boundaries of the National Capital Region that would cut across the Asola-Bhatti wildlife sanctuary and the southern section of the ridge area near Mehrauli.

Strangely, the high-level committee for the "peripheral expressway" - as it has been termed in an official note presented recently before the Delhi Cabinet - does not feature any environment or forest official, not even the Delhi environment secretary D S Negi. Chaired by the Delhi chief minister Sahib Singh Verma, the committee consists of, among others, the transport minister, the chief secretary of Delhi, the director-general of the Central Public Works Department, and the land and building secretary of the Delhi government.

When contacted by Down To Earth (DTE), Sanath Kaul, the land and building secretary, categorically stated, "The alignment of the expressway has not been fixed yet. But we are not interested in cutting across any sanctuary." Even Negi emphasised that the proposed expressway would run "outside the Asola sanctuary".

However, according to a copy of the map of the proposed expressway, the peripheral highway would connect four national highways (nh) - nh-1, nh-10, nh-8 and nh-2. It would start from the Delhi-Faridabad border at Badarpur, run through the Tughlakabad Shooting Range, parts of the Asola wildlife sanctuary that lies behind Sangam Vihar area, Sultanpur, and culminate at Bakauli on nh-1. The index on the map specifies that the expressway has been plotted according to the Delhi Development Authority's alignment.

The project is suspect on other grounds as well. The aim of the expressway, says the Cabinet note, would be to "facilitate the movement of through traffic, which is almost 50 per cent of the total goods traffic entering Delhi." According to Dinesh Mohan, head, Centre for Biomedical Engineering at the Indian Institute of Technology, Delhi, this percentage cannot be considered authentic since "no study has as yet been conducted to gauge the quantum of traffic flow in Delhi". This view is shared by A Moitra, deputy director, directorate of transport research, who said that although some figures are being quoted in an arbitrary manner by the government, "they are based on estimates gleaned from various vehicle associations and are quite overestimated."

The expenditure involved in the expressway also raises several eyebrows. The cost of the proposed road would be to the tune of a whopping Rs 1,200 crore. The 1997-98 Delhi budget has already proposed a sum of Rs 300 crore for the project. The Cabinet note recommends private investment via the build-operate-transfer route to finance the project. To this end, the note has proposed that "two strips, each of 50 metre wide, would be provided on both sides (of the road) for commercial exploitation". In its recommendations, the note refers to the January 24, 1997 amendment of the National Highway Act, 1956, which "permits private sector participation in the development and maintenance of National Highways".

Meanwhile, the adverse socio-environmental implications of the amendment have already come under severe attack from environmentalists as well as legal experts (DTE, Vol 5, No 19). Says Mohan, "Such immensely expensive projects must be preceded by a proper public hearing coupled with a serious study into its socioeconomic ramifications." Expressing ignorance about the Asola sanctuary issue, transport minister Rajendra Gupta said that he had not seen the blueprint of the expressway. "But if that is the case, we cannot permit it at all," he assured.

He, however, seconded the proposal of commercial exploitation. "Delhi is basically an intermediary trading stop. On their way to other cities, majority of trucks enter Delhi only to load or unload goods at various warehouses. Why should all warehouses be located inside Delhi? Why not shift them to areas adjoining the expressway?" he asked. When questioned how the government plans to ensure that "commercial exploitation" would only be restricted to building warehouses and not other commercial and residential complexes which would beckon the land mafia, Gupta's reply sounded evasive: "Who would go and stay there?"