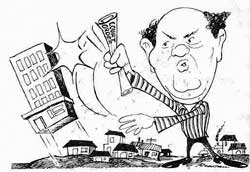 Trade unionist Datta Samant has helped 2,500 families of quarry workers in Bombay to get their settlement recognised as a slum. The 35-acre plot amid sand quarries at Powai lake was notified as a slum in 1984. But plot-owner Jitendra Sheth was more interested in developing the site as prime real estate and so he obtained a stay on the government notification. Last week, responding to a petition filed by Samant, the Maharashtra Slum Areas Tribunal vacated the stay.

But even before the stay was vacated, Sheth had thwarted every attempt by local authorities to provide basic amenities to the quarry workers settled on the plot. And, even as the plot's status was being disputed in court, Sheth sold off portions of the plot to a number of property developers. These buyers, as well as Sheth's own firm, Nahar Builders, started constructing high-rise buildings in the vicinity of the existing settlement.

Responding to Samant's petition that construction be stopped, the tribunal asked the Bombay municipal commissioner why multi-storeyed buildings are being constructed on a plot described in the stay order as "a source of danger to the health, safety and convenience of the public by virtue of being overcrowded and lacking in basic amenities." Sheth and his fellow-builders, alleging the tribunal was overawed by Samant's reputation as a tough trade unionist, are appealing its ruling. Meanwhile, the slum-dwellers are basking in their new-found status, which entitles them to drinking water, electricity and sewage disposal.