The smog will remain 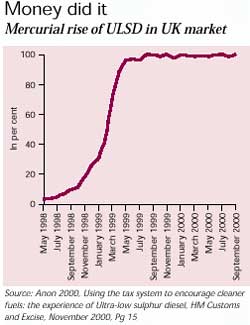 a fresh controversy has erupted regarding the implementation of the National Auto Fuel policy. Union minister of shipping, road transport and highways T R Baalu, in a letter to Union minister of petroleum and natural gas Mani Shankar Aiyar, has demanded a review of the policy's implementation be preponed. The review is scheduled for 2006 in the policy, cleared by the Union cabinet in October 2003.

From April 1, 2005, 11 Indian cities will move to Euro iii levels while the rest of the country moves to Euro ii levels. "Implementing the Euro iii norms in 11 cities looks like an uphill task. We have written the letter to bring forward the review and so avoid a similar situation while implementing Euro iii across the country and Euro iv in 11 cities, so that institutions have the necessary time to meet the deadline,' says a senior official of the Union ministry of shipping, road transport and highways (mosrth). Thus, the mosrth is trying to hasten the process of implementation of the auto fuel policy roadmap. It is noteworthy that the Environment Pollution (Prevention and Control) Authority for the National Capital Region had recently held discussions with the ministry over preponing the fuel policy roadmap.

The development has highlighted another issue. How did the review find its place in the final policy when it wasn't a part of the expert committee recommendations? "The government thought it would be better to have a review before the roadmap is implemented in its fuller sense. So, it added the clause when the Cabinet cleared it,' reveals a senior oil industry official.

Why the letter? While the automobile industry is ready with the technology to meet the Euro iii norms, the oil industry might falter. Industry representatives have already written to the Union ministry of petroleum and natural gas (mopng) in this regard. Both the private and public sector refineries are not in a position to implement the roadmap. This is the drawback the mosrth seeks to highlight.

The national oil companies blame the Reliance Industries for delaying the roadmap. "Reliance has actually written to the ministry saying that it was not aware of the auto fuel policy deadline, because no formal communication was established on the roadmap,' says an oil industry official. But Prabh Das, joint secretary, mopng , asserts: "Nothing doing. We have already sounded them that we cannot alter the roadmap. Moreover they are free to import if need be. They have to meet the deadline.' Such a situation for the industry shouldn't have arisen in the first place. Refineries had one-and-a-half years to comply with the new norms.

A fiscal solution Even as the roadmap gets debated repeatedly, no thought is given to preponing its implementation to achieve faster pollution cuts. The implementation of Euro iv in select cities is scheduled for 2010, after the review. The earlier the review, the easier it will be to make the plan operational. The government hasn't yet tried a fiscal tool to implement the emission norms, as done by other countries. In the uk, between 1997 and 1999, the increase of duty differential in favour of Ultra Low Sulphur Diesel (ulsd) from one to three pence per litre persuaded oil companies to produce and supply ulsd and achieved an almost complete conversion of the diesel market. The country met the European Commission's proposed 2005 diesel standards six years before schedule (see graph: Money did it).

In fact, the expert committee on auto fuel policy had recommended fiscal incentives. But the Union cabinet held that refineries did not need them. The then petroleum minister Ram Naik said fiscal incentives could only be given in the annual budget. "There is no question of fiscal incentives. Funds are not a problem. Moreover, they are passing on the cost to the consumers,' argues a senior planning commission official. These arguments and counter arguments do little in clearing the uncertainity over the implementation of improved standards.