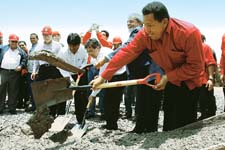 As the first South American energy summit finished in the third week of April in the Caribbean island of Margarita, Venezuela, participant countries agreed to set up an energy council to follow up hemispheric energy-related agreements.

The summit, attended by leaders from 10 out of 12 South American countries, also discussed plans for a regional gas pipeline, development of biofuel and creation of the Bank of the South, a central bank for all of South America if all goes as these countries plan. One of the main aims of the bank will be the creation of a single currency for the whole continent.

Concentrating on the energy theme, the summit also discussed Venezuela's proposal for a South American Energy Treaty to guarantee energy, gas, petroleum and alternative fuels to the region for the next 100 years.The participants designed an energy strategy for the region and decided to work for the development of the continent as the Union of South American Nations (Unasur). Initial announcements said it will be based in Quito, Ecuador.