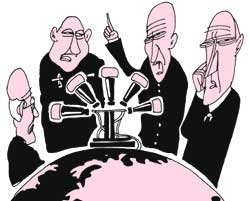 As the world's environment leaders gather for the tenth anniversary of the un Framework Convention on Climate Change (unfccc) in Buenos Aires, Argentina, from December 15-17, they will approach the problem of changing climatic conditions due to global warming with the belief that the scale of the problem is measured in centuries. With this approach, they run the risk of not addressing the problem without the sense of urgency that it deserves.

The Tenth Conference of Parties (cop-10) to the unfccc begins on December 6 with meetings of the subsidiary bodies of the convention (see box: Issues). However, panel discussions scheduled for environment ministers and other heads of delegation during the last three days are sure to be closely watched. They will assess the convention's accomplishment so far, deliberate over present challenges and provide direction for future discussion, analysis and action.

A background note for the panel discussions, prepared by the president-designate of cop-10, states in the very first paragraph: "Ten years is not long in the history of a problem whose scale is measured in centuries.' While this approach justifies the meagre progress of the last ten years as significant, which the note subsequently does, environment ministers may just miss the point