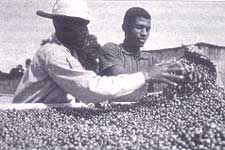 Caribbean agriculture has been laid low by a large variety of pests and a series of hurricanes and drought. "We have a crisis in agriculture in the Caribbean," admits Hayden Blades, executive director of the Caribbean Agricultural Research and Development Institute, based in Trinidad.

The latest threat is the hibiscus mealy bug, which is spreading havoc through the eastern Caribbean, attacking a wide range of crops. In Jamaica, coffee farms are under attack from a worm that attack berries before they are reaped. Similarly, while the mealy bug has extensively damaged crops on the island of Grenada, banana farms in the north- ern Caribbean have been hit by the black sigatoka fungus.

Aggressive efforts are afoot to halt the pests in their tracks. With the assistance of the UN's Food and Agriculture Organization, regional governments are drawing up plans to eradicate the screw-worm, a fly that attacks cattle mainly in Jamaica, Cuba, Haiti, the Dominican Republic and Trinidad and Tobago. "No one country can deal with these problems on its own, and there must be regional collaboration," says Blades.