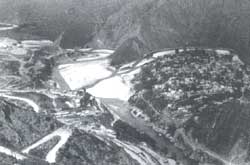 FOR Tehri townsfolk, May proved to be the cruellest month, beginning with confusion and protests. The prevailing mood is that of widespread scepticism about eviction notices that came as a bolt from the blue, warning of inundation of the town.

So, with a mere 13 per cent voter turnout for the Lok Sabha polls on May 2 due to an Uttarakhand movement-sponsored boycott, the anti-Tehri dam meet attended by Medha Patkaf and Sunderlal Bahuguna found a warm support. "Koi nahin hatega (nobody shall budgeb" the crowd boomed.

Eviction possibility, however, seemed inevitable. On March 23, notices signed by the state chief secretary were issued to schools and offices, citing June 30 as the deadline for vacating Tehri town, or else face inundation during monsoon.

The kneejerk decision which came in the case of this more than two-decade old controversial project instead of the fulfillment of last year's commitment to "look afresh" into the issue (Down To Earth, Vol 4, No 4), has created much resentment. This spurred the Sarvodaya leader Sunderlal Bahuguna to go on a fast of'penance' on April 13.

The official explanation for the sudden eviction notice is that the coffer dam - the structure in front of the main dam meant to protect it from water - has reached an altitude of 650 m, that is, 10 m above the altitude of the Tehri town. As a result, the dam's twin diversion tunnels may be incapable of taking the load off, and cause inundation.

Says sub-divisional magistrate A S Tiwari, "Shifting is inevitable. We are cajoling people by offering incentives; we may have to push a little." The Tehri Hydel Development Corporation (THDC) commenced action on "warfooting". Last month, its personnel trucked out lock stock and barrel the All Saints Convent School to the New Tehri township which is a good 20 km uphill drive.

Says M P S Tyagi, general manager (project), THDC, "Right from 1991 we have given compensations." However, a new package, offering the option of a 0.81 ha plot to oustee families came into effect only in October 1995. Says Tyagi, "Eviction is a technical necessity. If the court decides against it, then we will not be responsible for possible flooding."

The protest march of May 3 against the autho6ties' decision saw supporters of various hue. Says Kamal Singh of the dam-affected Asena village, "The dam people have been quarrying from the hills above my village. But we have blockaded the roads and stopped them." Medha Patkar, who arrived in Tehri hills to bolster th agitation, says she is determined to organise a mass support for the anti-dam campaign.

Another source of support was the Bharatiya Janata Party and the Sangh Parivar. The Vishwa Hindu Parishad supremo Ashok Singhal recently appealed to the authorities for the "uninterrupted flow of the holy Ganga". Says Bahuguna, "We are trying to create consensus on this issue. So support from anybody is welcome."

Anti-Tehri dam activists are now planning a battle on various fronts. Apart from the inadequacy of the dam's risk calculation, its rehabilitation policy which does not stick strictly to the land- to-land policy, leaves ample scope for a stringent opposition.