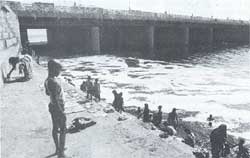 IN AN attempt to pour oil over troubled waters, the Union ministry of water resources (MWR) has prepared a draft national policy guideline for the allocation of river waters amongst states. The guideline, formulated by the Central Water Commission (CWC), has drawn sharp criticism from state governments. Barring a handful of states like Karnataka, the majority are opposed to the very idea of such guidelines. Says A D Mohile, acting member of the CWC, "The differences have been narrowed down, but serious problems persist."

The new set of guidelines constitute a modified form of the initial draft prepared in February 1994. The need for a fresh draft was felt after a series of consultations with the state governments. The new draft is expected to figure in next meeting of the National Water Resources Council. According to MWR commissioner N Suryanarayanan, "We can only provide guidelines. It is up to the states whether they want to follow them or not."

The draft deals with the general principles of water sharing, equitable distribution, review of allocations according to demand, and monitoring and administrative arrangements. Among its important aspects is that a river basin should be considered as a unit while determining the allocation of its water amongst the states. The draft emphasises that neither the states nor the central government have absolute ownership or property rights over river waters. It also states that the concerned states should be responsible for maintaining water quality. The draft recommends that the distribution of water should depend upon the volume of river water that passes through the concerned states and the requirement and feasibility of demand in each of them.

The draft also includes the concept of national interest, which is explained in terms of honouring environmental imperatives, facilitating interstate navigation in national waterways, and long distance transfer of water from surplus basins to deficit basins.

Water sharing disputes have been common in India. Although agreements like those for sharing Sone waters between Madhya Pradesh, Uttar Pradesh and Bihar, and Yamuna waters between Punjab, Haryana, Delhi and Rajasthan have been arrived at, disputes have often gone beyond amicable settlements. The disputes have led to the setting up of panels like the Eradi Commission for Ravi-Beas or tribunals like those for the Narmada, Krishna or Cauvery, where the allocation arrived at is legally binding.

B G Verghese of the Delhi-based Centre for Policy Research says that 90 per cent of disputes occur over allocation of surface flows and welcomes the attempt to formulate guidelines. He says, "It is an effort to prepare a framework for resolving the problem of water sharing." For the present, however, with consensus between the states and the centre yet to be achieved, the future of the draft guidelines depends on political will.