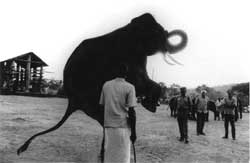 authorities at the Simplipal Tiger Reserve in Orissa have recently formed 19 camps to monitor the movement of bull elephants and nab poachers who continue to threaten the gene pool of tuskers, an already endangered lot. This measure was taken in view of the fact that poachers in the reserve have been extremely organised and have to be tackled effectively.

Several efforts have been on in India as well as in many other countries in Asia and Africa in order to increase tusker populations. Hence, the poaching of bull elephants in Simlipal