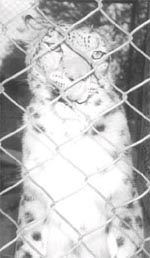 time and again wildlife activists have maintained that wildlife management in India is governed more by bureaucratic decisions than any scientific or practical reasoning. Here is one such instance.

The transfer of a seven-year-old snow leopard from the City Forest National Park in Srinagar to Darjeeling has kicked up a furore. She was only 15 days old when forest officials rescued her from the Kargil forests in a very critical condition. Rescued along with her was another cub which, unfortunately, succumbed to injuries en route to Srinagar.

However, the shifting of this animal has triggered a controversy within the wildlife department. The officials of the department are divided in their opinions: one section is strictly against the leopard's transfer, while another quietly acquiesces to this bureaucratic decision.
The disenchanted section of employees accuse the bureaucrats of