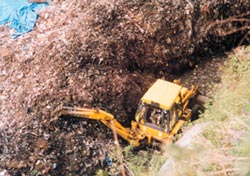 a delay in setting into motion a solid waste management project has led to the piling up of 16,000 metric tonnes of untreated garbage in Shimla. Residents have raised a stink, complaining about the foul smell emanating from the trash heap.

People staying near the site also fear the outbreak of an epidemic. Though the Rs 7-crore Norwegian Agency for Development (norad) funded plant was supposed to have started functioning by 2001, it has not yet become operational.

A memorandum of understanding (mou) signed between the Shimla Municipal Corporation and Larsen and Toubro three years ago, required the company to carry out waste disposal for five years in the city.

Around 45 tonnes of untreated garbage is being dumped daily at the site. Civic authorities are now looking for an alternative place. Shimla municipal commissioner A N Sharma admits that the mounting garbage has become a serious problem. "We will have to take some drastic measures,' says Sharma. Mayor of Shimla, Sohan Lal feels that an alternative site to dump the garbage is urgently required.

People living close to the disposal site, meanwhile, voice concern over the official apathy. "The civic authorities are hardly bothered, the least they could have done was to spray insecticide near the site,' says Krishan Sharma, a resident.

Over the years, the civic amenities of the picturesque capital of Himachal Pradesh have proved increasingly inadequate to cater to the burgeoning tourist influx and the booming population.