Writing its own future 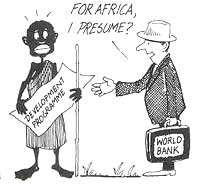 FOR AFRICA, by Africa, is the World Bank's new slogan while handling the continent's economic problems. V K Jaycox, vice president for the African region, recently said the Bank would no longer dictate development plans to African nations, would stop "imposing" foreign expertise on the governments and aim at "building Africa's capacity to help itself".

"In future," adds Jaycox, "the Bank will help fund African governments to write their own development plans." While most of the world's poorest countries are in Africa, the continent has a large natural resource base and is a larger trade market for the US than the former Soviet Union and Eastern Europe put together.