The case for and against.... 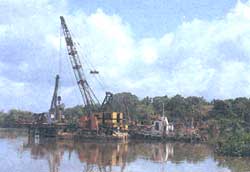  Trains running at a high speed will have an impact on historic buildings and disturb the peace of the residents.

 Vibrations generated will die within 50 metres of the track.

 Bridges will have to be built over estuarine areas of the Zuari and Mandovi. Several bridges have fallen here in the past.

 The railways have constructed bridges through far more difficult terrain. The Zuari and Mandovi bridges will be of the same design as the Thane creek bridge.

 Goa's unique khazan lands from Mayem to Cortalim will be totally destroyed.

 Khazan lands, or coastal estuarine lands, are found all over the east and the west coasts of Bengal, Kerala, Maharashtra and Karnataka. KRC is taking care to see that the damage to these lands is minimal.

 Current land prices along the coastal belt go up to Rs 3,000 per sq metre -- much higher than those in the rest of Goa, or areas in Maharashtra and Karnataka traversed by the proposed railway.

 Rich builders, developers and architects are affected by this project. People are being reasonably compensated.

 Scope of employment for Goans is nil. Not a single Goan is employed at the KRC office in Panaji.

 Goa is being used only as a corridor to link Maharashtra and Karnataka with no economic benefits to the state.

 This is a national project and will help the entire country including Goa.

 The plan did not take into account the Konkan railways because the project had not been concretised at that stage.

 The existing well-developed road network in Goa will be disrupted.

 Goa roads are inadequate. Even the national highway is congested. The project will help decongest the roads.

 Goa's villages will be bifurcated causing irreparable damage to cultural ties and the free movement of the people.

 Even the existing metre gauge line from Vasco to Londa bifurcates many villages. Houses have come up on both sides of the track with cultural affinities intact.