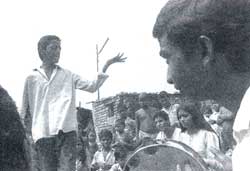 THE CHILDREN of Anna Nagar, a slum in New Delhi, draw crowds when they put on street plays they wrote themselves on socially relevant issues that range from the danger posed by multinationals to the evils of illiteracy. Kelewallah (banana vendor), is typical of their productions, telling as it does the tale of a hardworking banana vendor, who is cheated of his earnings by thugs. A neighbourhood girl offers to teach him simple mathematics so he won't be cheated again and he accepts her offer. The theme of this play is that education is a tool that liberates. Narendra Kumar, a 9th standard student, explained his natak (drama) group "is trying to highlight the problems of the community by using the children's hidden talents. We first sat down and talked about the problems we saw around us. Then, we decided to visualise these problems."

Anna Nagar is tucked away behind the opulent World Health Organisation building. More than 900 jhuggis (hutments) are jammed together alongside narrow, stony paths which wind in and and out of the basti (slum). Anna Nagar is home to about 7,000 inhabitants, most of them from the Garwhal area of Uttar Pradesh, who migrated to Delhi to make a living.

Belying the seeming quiet of the basti, life in Anna Nagar is a constant uphill battle. There are only 12 water pumps in the basti and the adjoining railway track and a nala (drain) serve as toilets. Employment for many is insecure at best and one result of this is rampant alcoholism. Bina, an Anna Nagar resident, pointed out their problems are compounded by basti politics. "The major problem of the basti", she explained, "is that local goondas have always run the show. Instead of trying to improve the conditions in the basti, they take advantage of their muscle power." The government is of little help, either. It installed the 12 water pumps, paved the lanes with stone and put in a drainage system only in response to pressure from local residents and from Ankur, an NGO working in the basti. Exercising their rights over the railway track seems to concern government and railway officials far more than the need for low-income housing. Some months ago, residents of about 10 of the jhuggis were issued eviction notices because they had trespassed on railway property.

It is when seen in this context, that the street plays of Anna Nagar assume importance. They depict the community's problems and suggest simple solutions through messages that even the younger children can understand. The aim, says Sunanda, an Ankur member, "is to pass messages from children to children."

Street plays became a part of life in Anna Nagar a few years ago. Ankur's initial involvement was in the national literacy campaign, but a member, Jaya Srivastava, explained, "We decided to concentrate more of our attention on non-formal education initiatives aimed at raising social consciousness." And most importantly, the work of raising social consciousness in the basti is carried out by using the vernacular.