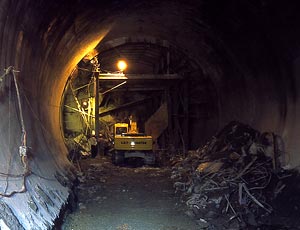 Disaster struck the Tehri dam site in Uttaranchal at 10:15 pm on August 2. A huge landslide inside the vertical shaft of a tunnel claimed the lives of 29 workers and left about 12 injured. According to Puneet Kansal, district magistrate, Tehri, one person is still reported missing. Of the injured, three were critical and were admitted to the Himalayan Hospital at Jollygrant near Dehradun.

The victims were working at various levels of the 240-metre shaft and in the two horizontal tunnels that it connects. The horizontal tunnel at the top is called the Intermediate level outlet (ILO). The ILO and the vertical shaft are meant to drain excess water from the dam reservoir once it is filled, to the tunnel, T3, at the bottom of the shaft. Draining excess water is important because this dam is an earth and rockfill dam which can be damaged if water passes over it. But such a dam can withstand seismic vibrations to an extent. Since Tehri is in an earthquake-prone region, so the authorities had settled on an earth and rockfill dam and not on a concrete dam.

At the time of the incident, concreting work was going on in T3 to strengthen the tunnel. In the ILO, workers were involved in digging and excavating activities (see: Buried alive).

Officials of the Tehri Hydro Development Corporation (THDC), which is supervising the work on the Tehri dam project, refused to comment on the exact cause of the tragic incident. But J P Gaur, head of Jai Prakash Industries, the contractors responsible for constructing the dam structure, said, "The dam is strong but inherently the mountains are weak.' The comment begs the question: was such a tragedy foreseen? And if so, what steps had been taken to protect the lives of the workers from the "inherent' risk?

According to P C Nawani, head of the Geological Survey of India (GSI), the landslide could be a result of incessant rains and the consequent seepage of water into the rocks. Nawani, who visited the site two days after the tragedy, told journalists that the work on the area from which the landslide occurred should have been finished before the rains, which begin in June. Other experts who visited the dam site also said rain and the weak mountains led to the incident. Some officials have pointed out that the portion of the hill from which the landslide took place should have been properly lined with microsilica to strengthen it. J P Industries officials say that they had ordered a consignment of microsilica, which is imported, but its delivery was delayed "due to some reasons.'

But who will bear the responsibility for the incident? Says R D Prabhakar, executive director, THDC, "It is everyone's responsibility. We are the supervisors, it is their (J P Industries) responsibility also.' Gaur announced that the weak mountains would be fortified. However, no one is clear as to how all the mountains surrounding this huge reservoir can be strengthened. Once completed, the 260.5 metre high dam will store 3500 million cubic metres of water in a reservoir that will extend 45 kilometres upstream in the Bhagirathi valley and 25 kilometres upstream in the Bhilangana valley.

Various reasons are being given for the mishap. One of them is that the work in the shaft was being done at a level lower than that of the water already in the reservoir. Most of the workers were engaged at levels between 618 and 670 metre elevations above sea level, while the water in the reservoir stood at about 648 metres. Some people say the pressure of the reservoir water coupled with seepage could have led to the landslide.

Meanwhile, the police have registered a case against J P Industries. "We registered a case under the section 304 (a) against the company (J P Industries). Basically this section covers offences involving carelessness endangering human lives. As far as the case is concerned the investigations will be on,' says V Murugesan, superintendent of police, Tehri.

Union power minister P M Sayeed visited the dam site on August 4 and announced the setting up of a three-member technical committee to investigate the matter. M S Reddy, former secretary, Union ministry of water resources, will head the committee. "The recommendations are will be fully implemented,' says Sayeed (see interview: Status quo). Chief minister of Uttaranchal, N D Tiwari, also visited the site on the same day and ordered a non-technical magisterial enquiry into the matter (see interview: "In the future no such big dams should come up in Uttaranchal').

The committee set up by the power minister will hand over its report in due course. But whatever this committee finds on the causes of the tunnel disaster, it is clear that this incident has once again raised questions about the safety of the dam located in the young, fragile and highly seismic Himalaya.

But the inhabitants see this incident as a curse for the submergence of the old Tehri town. The town is located at the confluence of rivers Bhagirathi and Bhilangana, just a few hundred metres upstream of the Tehri dam. On July 29, the water level in the reservoir went up by about 7 metres to 655 metres. This caused submergence of various parts of the old Tehri town. But some people were still present in their homes when the water entered the town and had to flee to save their lives (see: Deluge). The water level has now receded to the earlier 648 metre mark and in the ghost town of old Tehri, these people were seen by Down To Earth hunting for the little they could retrieve.