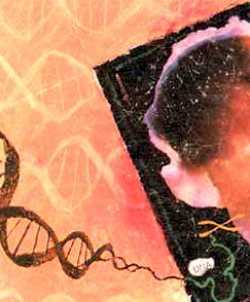 A LITTLE learning is a dangerous thing. That wisdom is increasingly dawning on scientists who are unravelling the truth about genes and diseases. Thanks to breakthroughs in molecular biology, scientists can ascertain from blood or tissue samples the presence or absence of genes that are responsible for about 10 to 12 genetic disorders.

Gene defects cause several diseases and malformations and can be passed on to future generations. These disorders include cystic fibrosis -- a condition in which thick mucus blocks the airways to the lungs -- and Huntington's disease -- a chronic degeneration of the nervous system (see box Gene related disorders).

Although genetic screening programmes have been around for about 30 years -- helping to detect defective genes in couples contemplating children, older people with family histories of certain diseases and even foetuses -- their use is increasing around the world and the tests are becoming simpler to carry out.

And with the rapid progress being made under the Human Genome Project -- an international collaborative effort to unlock the secrets that lie in the 50,000 to 100,000 genes that comprise the human genome -- experts suggest that it won't be long before 100 different single-gene disorders can be uncovered. It may well soon be possible to make all diagnoses on the basis of a single-cell biopsy.

Few remedies
But, so far, this knowledge has yielded few acceptable remedies. Simultaneously, the ethical basis of such efforts are being vociferously questioned.

Headlines in Britain recently ranted: Your baby is going to be a homosexual, so we will abort him. Scientists' nightmare vision of DNA revolution and Ignorance maybe better: Do you want to know you will get breast cancer ?, building up a great deal of media hype on an issue that still lacks clarity and conjures up frightening visions of a revival of Hitlerian eugenics.

Genetic disorders are far more common than previously realised and most are first manifested in childhood. In the developed countries of western Europe and north America, the decline of infective diseases and nutritional disorders has led to congenital and genetic disorders acquiring relatively more importance.

In the UK, genetic defects are responsible for 50 per cent of stillbirths, 20 per cent of early newborn deaths and 50 per cent of all childhood deaths. Five per cent of the under-25 population suffer from genetic disorders -- which could rise to 65 per cent in older people if common diseases with strong genetic causes, like cancer, are included. As many as 3 per cent of all couples are at high risk of having a handicapped child.

The benefits
The information generated from genetic screening is double-edged. Identifying genes that cause diseases or predispose individuals to them will enhance the understanding of the causes of diseases and suggest new ways of managing them, points out Rodney Harris, professor of medical genetics at St Mary's General Hospital in Manchester. These efforts have already begun to generate a few preventive, diagnostic and therapeutic procedures, the full potential of which is unknown.

The gene discoveries are being put to clinical use with astonishing speed. For example, the detection of the mutation in the Huntington's gene by an international group in early 1993 was faxed to centres in the UK, evaluated on stored DNA from hundreds of patients and put into pilot services within 3 weeks. Recently, a genetic test for cancer risk was developed and launched by Oncor Inc, a tiny biotechnology firm in Maryland, USA. The Oncor procedure will allow doctors to do what till now was done only by a handful of genetic research centres: identify people who have inherited the genes for breast and colon cancers.

Similarly, the gene that causes ataxia -- an incurable disease that destroys the brain cells governing muscle control -- was discovered in early 1993 by scientists at the Baylor College of Medicine in Houston and at the University of Minnesota in Minneapolis; tests for this disorder are now routinely undertaken.

But these very strides have taken modern medicine to the uncomfortable position of being able to predict the onset of diseases but being still unable to treat them. Says J A Edwardson, director of UK's Medical Research Council Neurochemical Pathology Unit, who recently visited Delhi, "I am not in favour of screening people...especially for diseases for which we have no cure."

Questionable wisdom
Several experts question the wisdom of telling patients about fatal disorders they could suffer because of gene defects. For Gwen Terrenoire of the Paris-based Centre de Sociologie de l'Ethique, this problem is particularly significant for incurable disorders that strike adults. "Even if predictive information is technically possible," she asks, "what ethical justification can there be for communicating it to the person concerned?"

Most geneticists agree that they know nothing of how individuals would react to being informed that in 20 years' time they could suffer from cancer or a psychiatric disease or die because of a genetic defect. But there are some indicators to responses. Elaborates Harris: women who have lived through a prolonged illness and the death of a brother with Duchenne muscular dystrophy are unwilling to take any risk of producing an affected son and nearly always request carrier and prenatal testing.

On the other hand, many people at high risk of Huntington's disease, for example, are hesitant about tests that may reveal them to be doomed to an untreatable and lethal disease, even though concern for their offspring makes uncertainty difficult to accept. Mississippi court reporter Pam Shima, a victim of an incurable but mild ataxia who has 2 sons, concurs with this view and says she will not test her children. Life abounds with risks, she says. "I'm more worried about my teenage son behind the wheel of a car than about whether he will be in a wheelchair at age 45."

There is also a great deal of concern about the need to counsel patients before and after screening to ensure that they are aware of the risks and limitations involved. For example, Harris explains, "All prospective parents wonder if their offspring will be normal and great distress follows the birth of a handicapped child." He adds, "The development of screening for foetal and genetic disorders has added stress to these natural worries and there is an urgent need for the counselling of individuals who, as a result of a screening programme, are unexpectedly found to be at high risk."

Nancy Wexler, an expert on Huntington's disease, agrees. "Presymptomatic testing needs to be done with extreme caution." Emotional turbulence unleashed by testing can rend families. In a recently-tested Pacific coast clan, one member who was found to have the disease gene lashed out at relatives who tested negative, accusing them of collusion with researchers. Says Wexler, "Imagine the rifts in the nuclear family. It's explosive. People who are unaffected feel guilty. People who are affected feel enraged."

Diagnose and inform
Most experts say they cannot stress enough the need for accurate diagnosis or the importance of explaining to patients that a perfect diagnosis is not always possible. Diseases may also have genetic, environmental or multifarious causes, each with varying influence.

Decisions of whether a foetus with genetic abnormalities should be aborted often raise other ethical issues. It becomes exceedingly difficult, especially if personal and religious objections come in the way, say experts. Moreover, some specialists feel that experts are often in a better position to make such decisions for people who appear unable to make sound decisions because they suffer from a mental handicap, lack of social responsibility or other limitations.

In purely economic terms, genetic counselling and termination of pregnancies would make sense because it would restrict the occurrence of genetic disorders in the population, say specialists. The costs of genetic counselling would be more than offset by the savings in the lifelong care of people suffering from such genetic disorders as Down's syndrome and neural tube defects. But Harris warns that in the light of "the calamitous history of eugenics earlier this century", coercion by specialists should be discouraged.

John Harris, professor of applied physiology and research director of the Centre for Social Ethics and Policy at the University of Manchester, is particularly concerned about maintaining the confidentiality of genetic screening results. Besides providing information which may generate therapies and preventive strategies, he elaborates, screening will provide information that could be of interest to third parties: other family members, insurance companies, employers and government agencies.

Unlike other medical information, genetic screening of an individual can also indicate the health of other family members. These people, too, can be victims of unfair discrimination. The mere presence or absence of genes that predispose people to diseases, including diabetes, heart disease and certain cancers where the genetic basis of the disease is not clearly defined, may also be used to discriminate against them.

Besides diseases, what is perturbing researchers and social activists is the discovery of genes for various behavioural conditions. Last year, for instance, a gene for homosexuality was discovered, creating headlines around the world. But Dean Hamer, a senior researcher at the National Cancer Institute in Maryland, who with his colleagues identified a region on a chromosome which they said probably contained a gene or genes for homosexuality, is now worried. He recently denounced any effort to develop a test for "gayness". Not only would it be doomed for inaccuracy and be morally wrong, he said, but it would be "unethical and an abuse of research". Worried by such issues, several committees in the US and Europe have over the last few years drawn up guidelines to regulate genetic screening and even research. A report from the UK Nuffield Council on Bioethics, released last December, calls upon the government, health professionals, employers and insurers to agree to measures to protect people "against the potentially adverse effects of screening, including the misuse of confidential information, the risk of social stigma and the possibilities of eugenic abuse in the future".

Temporary moratorium
Currently, in the UK, genetic test results have to be declared like any other medical information when acquiring a health or life insurance policy. But in the light of the new fears, the Nuffield Council wants companies to "accept a temporary moratorium" on asking people to disclose genetic information and a similar abeyance has also been proposed by the Insurance Task Force of the Human Genome Project.

The US Institute of Medicine, in its report, Assessing Genetic Risks: Implications for Health and Social Policy, which was also published last year, express similar concerns. It points out, "Pressure, especially from those with commercial interests, is being exerted to broaden screening programmes and increase the number of genetic tests available to the public. Before safeguards are in place, the information could be misused or misinterpreted. Among the results could be loss of insurance or employment." Already, in several US states, laws to prevent the abuse of genetic information are on the books.

However, although there is concern about genetic screening and the ability to manipulate the human genome, the truth, says a recent editorial in the British journal Nature, is that "even the present (and much enlarged) understanding of genetics does not permit the eradication of genes supposed to be harmful, except by searching in the genome of every putative foetus for the DNA characteristics of such conditions as are known". And even if these genes could be eradicated, nature would get even because most of the proteins produced by these genes have several functions -- performing essential tasks in some organs at some time while presenting risks to others.