How the rot sets in 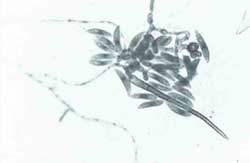 The first documented report on red rot (Colletotrichum falcaturn) dates back to 1901. However, some researchers daim that it was prevalent in the Indian subcontinent centuries ago and was referred to in Buddhist literature as Lai 6alan. Even if the fungus had existed before the British introduced "exotic" varieties, it is the new breeds - evolved after mixing the indigenous varieties with the exotic - that have become extremely susceptible to red rot.

The fungus begins We as a single cell and *en proliferates rapidV1. According to IISR beochemist V P Agnibotri, the fungus proauces an enzyme called avertase that breaks ap the sucrose (the subgLance which crystallisas into sugar after proAli set to sour. a proliferating red rot cessing). Sucrose is, however, useless to the sugar manufacturer in its broken-down form.

Red rot begins to wreak havoc when the fungus comes in4contact with the sweet flesh of a sugarcane plant. The pathogen (disease causing agent) bores into the rind (the hard, protective sheath covering the stem). The infection spreads rapidly when there's standing water around the crop.

The traditional hot spots for red rot are eastern Uttar Pradesh and northern Bihar. The fungus' impact on western Uttar Pradesh is a fungus recent ohenomenon. R L Yadav, who heads the agronomy team at the IISR, feels that the difficulty in replacing these varieties stems from the lack of any focused encleavour to breed and develop varieties that are resistant to the disease and also contain a high amount of sucrose.