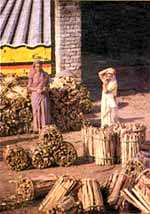 FAR from the shrill cut-and-splice medley of liberalisation, reform and the free market highway to economic growth, some experts have been advocating an alternative approach to alleviating poverty and dealing with energy scarcity in India. They banded together in Bangalore recently to suggest a bioresources strategy for India.

Bioresources, essentially energy and raw materials obtained from plants and animals, have sustained human civilisation for ages. Biomass, comprising wood, wood-waste such as lops and tops, grasses and shrubs, agro-wastes and residues, aquatic biomass and livestock wastes, continue to be the most widely used single source of energy in rural India.

According to A N Chaturvedi, senior research fellow at the Tata Energy Research Institute in New Delhi, "The annual consumption of firewood in India is about 150 million tonnes (MT). Of this, more than 100 MT are procured by `liquidation felling" -- in which case there is no regeneration -- either by the total destruction of forests or a reduction in their stocks."

M S Swaminathan, India"s foremost agricultural scientist, says, "Bioresources are fundamental to life and they are renewable. But the present patterns of use are destroying the very basis for sustaining them."

There has already been a fair amount of painful soul-searching regarding set development patterns and their impact on the environment. Says Piers Clark of Northwest Water Ltd in the UK, "The new young generation has a heightened environmental conscience. They are aware of the destruction that is occurring around them locally and globally and they are prepared to change their lifestyle to improve conditions."
Draft paper prepared A draft paper on bioresources strategy for India was prepared at the Bangalore meet, held on September 9 and October 2. It was based on the writings and work of H S Mukunda and S Kannaiyan of the Indian Institute of Science (IIS) in Bangalore, Madhav Gadgil and N H Ravindranath of the Centre for Ecological Studies at the IIS, Udipi Shrinivasa of the Centre for Application of Science and Technology for Rural Areas (ASTRA) at the IIS, M S Swaminathan of Centre for Agriculture Research Education and Development in Madras, Anil Rajvanshi of the Nimbkar Agriculture Research Institute in Phaltan, Maharashtra, Kamala Chowdhury, Anil Agarwal and Sunita Narain of the Centre for Science and Environment in New Delhi and others.

Delegates from India and abroad participated in 2 day workshop. Says Amulya Reddy, the founder-president of the Bangalore-based International Energy Initiative and the convener of the meet, "In India, there has been an abundance of policy but no goal or strategy for development and utilisation of bioresources. The country is at a stage where the negative consequences of ignoring the environment are beginning to show."

Ravindranath observed, "Our objective should be to develop a good strategy document with statistics that would provide a quick reference to policymakers." Says Mukunda, "We should endeavour to make the biomass strategy a statement applicable to a wide segment, giving clear choices of competing energy sources and technologies."

The experts emphasised that there is a high potential for obtaining energy from biomass: thankfully, India has vast land resources virtually on tap -- both in terms of deforested areas and barren wasteland; second, present patterns of bioresources use are inefficient, but their efficiency can be increased.
Optimal mix Biomass energy"s potential is significantly underexploited, primarily due to financial, policy, institutional and attitudinal constraints and misconceptions. The maximisation of biomass energy is no romantic dream: it can be achieved through income-generating use of land and water for an optimal mix of food, fuel, fodder, fibre, fertiliser, forest products and financially rewarding crops.

Wasteland around villages can be used for growing biomass. Mukunda holds that if these lands were to be put to use for growing forests with multiple outputs that yield commercial, food and fruit value, incomes could reach as high as Rs 20,000 per ha per year.

Mukunda has developed a model where a typical village is powered by 20 kilowatts (kw) of electricity from biomass gasification, at a cost of Rs 450,000. If 400,000 villages in India are covered under this system at 20 kw per village, the total cost of setting up 8,000 megawatt (mw) capacity would come to about Rs 180 crore. The cost of setting up 60,000 mw capacity in the conventional sector is approximately 10 times as much.

K S Jagadish of ASTRA, however, foresees resistance to this strategy by those with a vested interest in the current development pattern. He says, "Even with liberalisation, the present mindset is against bioresources strategy."

Some experts advise caution in the adoption of the bioresources strategy: it must, they say, develop "forward and backward linkages". Hari Sharan, president of the Switzerland-based Dasag Energy Engineering Ltd, says, "A bioresources strategy has to clearly enunciate how it would fit into the framework of existing development policies." He sees the proposals floundering without adequate support from the industrial and financial sectors, for which there has to be a continuity of policy.

B P Ghildyal, the Delhi representative of the International Rice Resources Institute, suggests that a bioresources strategy should promote agroforestry, "where small farmers utilise their holdings to meet their food, fuel and other requirements, using entirely natural methods".

This could lead to a conflict of interests between the needs and concerns of the industrial areas and the food and fuel needs of the poor. Says Ravindranath, "There will be a conflict between policy and field-level concerns unless there is an optimal mix of biomass plantations for industry and growing biomass for local needs."

The strategy also requires radical changes in the way technology is viewed, especially technology promoted with international aid. Says Ashok Khosla, director of the Delhi-based Development Alternatives, "Largescale technologies are the root cause of many of today"s problems. The projects financed by agencies like the World Bank and the Asian Development Bank are too large for administrative convenience. There is a need to promote smallscale self-sustaining projects."

With all these diverse but equally valid arguments, the forum could not come to a consensus on what the bioresources strategy should seek to achieve. While some experts advised its absorption into the present development policy framework, others argued that the strategy should clearly chart a new development paradigm. While some saw efficient bioresources development as the best way to supply decentralised energy for rural areas, others visualised a greater role for large biomass plantations fuelling gasifiers that could generate electricity on a giant scale or produce liquid fuels that would power transport.

The most significant benefit of bioresources development is increased employment opportunities in the countryside. Chiman Lal Gupta, head of the solar energy unit at the Sri Aurobindo Ashram, Pondicherry, says, "The development of bioresources and the generation of electricity will help bridge the urban-rural divide. It can promote rural industrialisation as well as green the cities." Concurring with him, Robert H Williams, senior research scientist at the Centre for Energy and Environment Studies, Princeton University, says, "Low-cost biomass electricity will draw industry to rural areas."

Women play a crucial role in the production, collection, management and conservation of bioresources. It is estimated that in most parts of the developing world, women spend more than 4 hours a day cooking -- the dominant biomass-converting activity -- accounting for about 90 per cent of the rural energy consumption.

The bioresources strategy stresses that women are better managers of the environment since they are often the first victims of ecological degradation. Says Gita Sen of the Indian Institute of Management, Bangalore, "Women are central to sustainable systems. When they are involved in the process of regeneration, the risks are spread across a larger number of methods and across group members, and there is an improved maintenance of infrastructure. The dissemination of information about varieties, species and multiple uses also becomes more efficient."

But major hurdles still remain on the path towards a bioresources strategy. Says Rajvanshi of the Nimbkar Agriculture Research Institute, "Renewable energy supply options can work only if electricity pricing is realistic." Says Hari Sharan, "The top-down strategies tried hitherto in India for the dissemination of renewable technologies have not worked. The net result of such an approach has been lack of involvement of villagers, inadequate and unsuitable training, operation and maintenance, immature designs, high capital costs, low prices of fossil fuels, and direct and hidden subsidies for the conventional power sector."

However, there is a clear indication that the Union ministry of nonconventional energy sources (MNES) has realised at long last that the decentralised mode is best for the promotion of these technologies. Says MNES secretary L M Menezes, who participated in the conference, "The wisest mode of deployment of bioresources to meet energy needs is the decentralised mode."

One of the most talked about models for replication were the community-managed biomass projects in Pura and Ungra villages in Karnataka. ASTRA has been working in these villages since the mid-"80s to provide biomass-based domestic services like drinking water and illumination and water for irrigation. These projects are managed by local community-level institutions, who have achieved up to 95 per cent efficiency in revenue collection, a major headache.

A major challenge facing policymakers is the reorientation of existing institutions dealing with bioresources to bend to the will of the strategy. Usually apathetic government departments also need to loosen their reins. Swaminathan says that the recent Constitutional amendments could be used to kick-start decentralisation, imperative for socio-political empowerment at the grassroots level.

What the experts at the forum were unable to chalk out was a financing mechanism to bankroll a working action programme that could be designated into specific programme components.

Nevertheless, the forum was decidedly upbeat. Says Reddy, "Politicians have a short time frame. Once they realise that villages can be lit by biogas or biomass-based electricity, they can be convinced of the need to make a policy change."

The greatest advantage of the bioresources strategy is that all sectors derive a benefit from it: industry, in terms of energy and resources; agriculture, in terms of employment and inputs; and a strengthening of the food and energy sectors. There are many hurdles ahead, but the proponents say that the first step has been taken: bioresources has been established as a concept. What is left to be seen is how long it takes to motivate people and donor agencies to take specific initiatives.