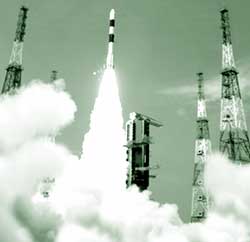 For India, space is not the final frontier to be conquered. The country's performance in solving mundane problems such as poverty, illiteracy and malnutrition may be dismal, but its space programme is soaring high. Its latest achievement: the May 5, 2005, launch of Cartosat-1, a satellite for mapmaking, with a 2.5 metre resolution. The 1,560 kilogramme (kg) Cartosat is the only satellite in the world with two panchromatic cameras positioned so as to measure even the elevation of the terrain mapped, allowing almost instant generation of 3-dimensional maps. The satellite can map the entire country in just 180 days, providing images clear enough for individual buildings to be identified.

Cartosat is India's 35th satellite; the first was Aryabhatta, launched in 1975. A satellite has an average life span of 7-12 years depending on its functions. At present, 15 Indian satellites are in orbit, of which as many as 10 have been launched in the last five years. Simultaneously, India has perfected satellite launch technology