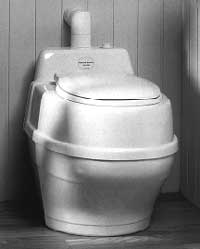 If sewerage and flush toilets are considered indispensable, the way to reduce their environmental and financial impact is controlling how much water they waste. What options are available to reduce water use in sewage systems?

Back to nature
In the flush system, the water is used not just to clean the toilet bowl, but also to transport the excreta. A family of five who uses a water toilet contaminates more than 150 thousand litres of water to transport 250 litres of excrement in one year. We must recognise that:
 Water is a precious resource and should not be used to transport faeces.

 Waste should be managed as close as possible to its source.

 Faeces and urine are resources rather than waste products.

The first step is seeing our biological "waste" as resources. All organisms need nutrients to grow; plants get these nutrients from the soil. Sewage systems bypass the natural flow of nutrients back to the soil and instead dump these nutrients into water. On an average, a healthy person discharges 100 to 400 grammes of faecal matter and 1-1.31 kilogramme of urine per day, which has nitrogen, phosphate and potassium.

So with this first step, toilets can be seen as collection devices rather than methods of getting rid of wastes. The problem is cultural - a society is "civilised" if it has access to flush toilets; faeces and urine are used only by less developed ones. But if these cultural blinkers are thrown away, progress can be made towards solving the problem of polluted rivers and groundwater, waterborne diseases and the enormous cost of sewage treatment.

The second step is recognise that water is a precious resource and should not be used to transport faeces. And since we know excreta contains dangerous pathogens, it makes very little sense to dilute pathogens in water. Even if a small amount of pathogen-carrying material is mixed with a lot of pure water, the result is still a dangerous mixture. Unless treated properly, human waste is hazardous waste and "civilised" society puts it into drinking water sources.

The third basic principle is that waste should be managed as close as possible to its source. Ignoring this principle is one of the reasons centralised sewage systems are so unsustainable both financially and environmentally. Sewerage tactics
One way to do this would be change sewerage tactics. The condominial sewerage system was developed in Brazil as a low-cost option as they cost about 50-80 per cent less than standard systems. Households are connected to small-bore pipes rather than directly to sewers. These smaller pipes meet up and connect to the main municipal sewer. Smaller bore pipes need less water and at far lower pressure, making an immediate savings in the volume of water used to carry faeces.

Another possibility is decentralised effluent treatment. A block of houses or a housing colony can have its own sewage treatment plant. Again this means that compared to centralised systems, far less water is used, as wastes do not have to be transported very far. Treatment plants can be smaller in size since the volume of wastes they will deal with will be comparatively small. Any sludge produced is used locally as fertiliser.

A high-tech system is to do away with water-based sewerage and have vacuum-based sewer system like the one developed in Germany. If these can be coupled with vacuum toilets there is virtually no need of water. The outflows from toilets, kitchens, and baths are sucked by a local pump into a household vacuum station, from where they are sucked into a central treatment point. Vacuum sewer network can work up to a 4 km radius with one vacuum station. The collected sludge can then be conventionally treated or used in a biogas digester. However, these systems as yet are expensive and energy intensive.