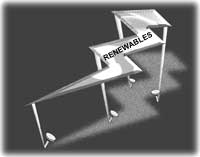 #1. Subsidies on fossil fuels (both covert and overt) make renewables uncompetitive.
The biggest barrier to commercialisation of renewable energy is political. Politicians use subsidies as sops to retain power. The Electricity (Supply) Act, 1948, requires sebs to earn a minimum rate of return (ror) of 3 per cent on their net fixed assets in service after meeting the financial charges and depreciation. But on the contrary most sebs are running on losses. According to the Planning Commission, to achieve the ror, the average tariff should be increased by Rs 0.60 per unit throughout the country. During 2001-02, the net subsidy on electricity was Rs 26,613 crore. Transmission and distribution losses are also staggering: it was 22.8 per cent in 1991-92 and 22.0 per cent in 1999-2000.

To defuse this crisis, the Planning Commission set up the Central Electricity Regulatory Commission