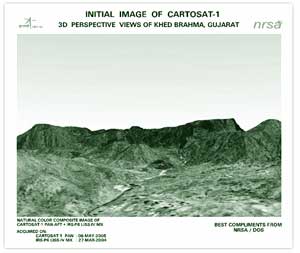 Launched in September 2004, Edusat is perhaps the world's only satellite fully dedicated to distance education. Edusat moves in a geo-synchronous orbit. Its 12 transponders (six in k u band and six in extended c band) provide five spot beams (see Glossary), each covering a specific region, and seven national beams covering the whole country.

Edusat is meant to transmit education programmes for students of primary, secondary and higher level institutions even in far-flung areas through 1,25,000 to 1,50,000 terminals. The content for the project is to be created by 20 nodal agencies such as the Indira Gandhi National Open University (ignou), the All India Council of Technical Education (aicte), national institutes/universities and state education departments.

The project has been bandied about as a vehicle to universalise education. But even after almost a year of its existence, it is severely underexploited, according to an official estimate. Barely 35 per cent of the national beam and around 30 per cent of regional beams are being utilised, s ays B S Bhatia, director of the Ahmedabad-based Development and Educational Communication Unit (decu). He hopes capacity utilisation will jump to 50 per cent in four to five months. But even that appears unlikely. According to a source associated with an educational institution developing programmes for Edusat, only two universities