The patterns of chaos 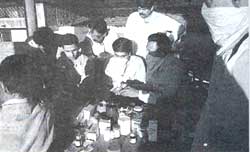 In the wake of the plague came the clamour for plague-beating drugs, particularly tetracycline. Says Prabir Biswas, director (marketing) of the Indian Drugs and Pharmaceuticals Ltd (IDPL), "When all hell broke loose, we had a stock of 4.8 million capsules ready." IDPL's Hrishikesh and Hyderabad plants functioned 24 hours a day; by October 4, the company had supplied 55 million capsules.

However, with tetracycline being touted as a "wonder drug", it was lost on the ordinary citizen that it was not a prophylactic, and had no business being imbibed prior to any symptoms of the disease. People bought the drug without prescriptions. In Delhi and Bombay, the drug sank into the blackmarket within 3 days. In the absence of firm directives, people rushed to homoeopathic dispensaries which recommended remedies such as phosphorus 30. Without adequate diagnostic information to back their claims, the Ayurvedic and Unani systems of medicine also touted their cures.

However, with the stocks of medicines declining rapidly, by early October, the IDPL was about to float global tenders for 5 metric tonnes of drug raw material. Vaccination against the plague was not even considered, simply because vaccines take 7 to 15 days to take effect, leaving injectees dysfunctional for the duration; moreover, they need to be boosted by supportive doses every 6 months. Only in early October c14 the "killed vaccine", manufactured by the Haffkine Institute in Bombay, reach the health ministry. The vaccine was to be restricted to high-risk groups like doctors, nurses and paramedics dealing closely with plague cases.

Quite unlike the drug industry, the pesticide industry was wellfocused. State governments under- took intensive spraying of dichloro cliphenyltrichloroethane (DDT) and benzene hexachloricle (BHC). Hindustan Insecticides Ltd (HIL) supplied 20 tonnes of BHC every day to the Maharashtra government, which went in for ethylene dibromide fumigation.

The use of DDT and BHC raised hackles. Says H C Aggarwal, professor of zoology at the University of Delhi, "DDT was used till 1989, but was discontinued as insects had apparently developed resistance. Its efficacy in the present situation is questionable." DDT and BHC are also ecologically questionable. Experts say that these toxic chemicals easily enter the food chain and also poison groundwater. Moreover, benzene is consid-ered carcinogenic.

The most effective means of protection, however, never made it to the cure list. Synthetic pyrethroids are said to be perfect for controlling epidemics. They slam the door on the transmission channels of the disease and leave no residual problems. But the chemical was imported only in early October.