The politics of Pollution 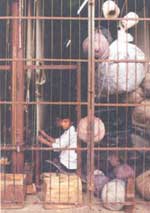 WEAVERS of Tibetan carpets in Nepal have been named the primary polluter of the Kathmandu valley. In a May notification, the government demanded that it set in place the mandatory pollution control measures or pay a fine of NRs 50,000 (IRs 30,300) or face closure or both.

Started as a scheme to rehabilitate Tibetan refugees fleeing the Chinese takeover of their country, the carpet industry adds US $70 million annually to the national exchequer and is second only in amount to foreign aid. About three lakh persons are employed in the carpet industry, and its products constitute Nepal's major export.

The Kathmandu valley has chronic environmental problems and nobody denies that the carpet-washers and wool-dyers are major polluters. However, many carpet-weavers question the government's motives in singling them out while ignoring the "real and larger polluters", such as the 61,000 vehicles plying in the valley, cement manufacturers and leather tanners who cure about 400 buffalo hides daily and dump the untreated liquid into the river.

The carpet industry's problems arise from the eagerness of the weavers to cash in on orders from Western dealers. Until four years ago, carpets were shipped to Switzerland to be chemically washed before sale. But since the washing was undertaken locally, the weavers have come under fire for discharging chemical wastes into rivulets and sewers that ultimately find their way into the Bagmati river. Experts say that at least 11 chemicals, including caustic soda, sulphuric acid and bleach, are in the water discharged by the plants, but the weavers insist that they also add a neutralising product that prevents pollution. They also insist they are abiding by washing standards set by the London-based International Wool Secretariat.

An estimated 70,000 litres of polluted effluents are discharged by the carpet washing plants every day by an industry that requires about 95,000 litres of water each day to wash an estimated 5,500 sq m of carpet -- and this in a city which has chronic drinking water problem.

Local washing is about 10 times cheaper and as washed carpets are lighter, freight costs are reduced. Moreover, producers get higher returns as they sell directly to retailers.

The industry has also come under fire from green and anti-labour activists in Europe. Barbara Adams, a columnist for the weekly, The Independent, has been campaigning to have the industry moved out of the valley and has called for a carpet boycott in Europe to protest both pollution and child labour. The campaign has drawn protests from even :nti-Slavery International' and there is already a market backlash. About 100 small-time manufacturers have closed shop and even the larger weavers are trying to keep their heads above water.

Exporters complain, "Politics rather than pollution is guiding the government's action. It is in the interest of the Swiss washers and German wholesalers to kill our local washing". Asks a major Kathmandu-based exporter, who did not want to be identified, "Where will the government employ the 300,000 people if this industry is killed?" Right now, no one seems to have the answer.