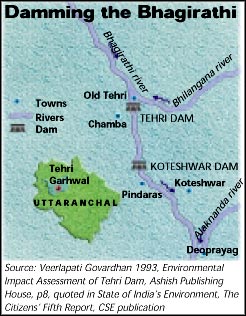 The Tehri dam project has always been embroiled in controversies. The initial protests against the dam started in the late 1960s when surveys were conducted at the dam site. An organised movement took shape after the Planning Commission gave its nod to the dam in 1972. In the 1980s and the 1990s, numerous committees were formed and several experts spoke both for and against the dam. The case went before the Supreme Court which passed a 2:1 verdict in September 2003. The dissenting judgement ordered further studies to establish the safety of the dam.

The main opposition to the dam was on account of it being built in a highly seismic zone. Another factor against it was the geological fragility of the young Himalayan range. So even if the main dam structure was strong, the surrounding mountains were not. Therefore, in the event of an earthquake or due to creation of a big reservoir, a major disaster could occur. Experts pointed out that in the event of the dam being breached, the reservoir built at such a height will be emptied in 22 minutes: within 63 minutes, Rishikesh will be under 260 meters of water. Soon after, Haridwar will be totally submerged. Bijnor, Meerut, Hapur and Bulandshahar will be under water within 12 hours.

On weak ground
The Tehri dam is located in one of the world's most active earthquake zones. Less than 15 kilometres below the dam site lies a fault, the geological boundary between the Indian and the Eurasian continental plates, that is capable of unleashing catastrophic earthquakes. Many seismologists have raised concerns about the structure of the Tehri dam being breached in the event of a major quake. The local protests in the late 1970s focussed on this aspect of the dam. In February 1980, an Environmental Appraisal Committee appointed by the Union government refused environmental clearance to the dam. "Taking into consideration the geological and social impacts accompanying the project, the cost and benefits expected, and after a careful examination of the information and data available, the Committee has come to the unanimous conclusion that the Tehri project, as proposed, should not be taken up as it does not merit environmental clearance,' the committee concluded.

In the face of protests, on March 18, 1980, the then Prime Minister Indira Gandhi wrote a note to the Department of Science and Technology to review the project. "It seems that larger areas of very fertile land are being submerged without any commensurate gains. It is true that these decisions have been taken over a period of time but there is great local distress and a feeling that the contractors and other such groups will be the main gainers,' she wrote. However, the work on the dam continued, albeit a bit slowly. By 1986, the diversion tunnels had started operating. The voices against the dam also continued rising with more experts coming out in the open against the deficiencies in the dam.

In 1986, a government appointed expert group, headed by Sunil Roy, rejected the dam project. But nobody paid any attention. The Tehri Hydro Development Corporation (THDC) was formed in 1988 to oversee the project. Again, in 1989, the D R Bhumbla committee of the Union ministry of environment and forests reviewed the project. After considering various aspects such as siltation, seismicity and dam safety, it rejected the project in 1990. The project authorities told the committee members that the dam structure was designed to withstand an earthquake of magnitude 7 on the Richter scale. The committee however concluded that this was not adequate as an earthquake of 8.5 magnitude was very much likely in that region.

Dissenting note
A committee of secretaries referred the Bhumbla committee report to yet another expert group. The new expert group included representatives from the University of Roorkee, the Central Water Commission, the National Geophysical Research Institute (NGRI) and V K Gaur, an eminent seismologist and former director of NGRI. Gaur had raised concerns about the design parameters of the dam in 1986 and said that an earthquake more severe than the structure had been designed for could occur at the site. This committee accepted the recommendations made by the earlier committee, that an earthquake of 8.5 was more likely. Surprisingly, it did not make any revisions in the structure of the dam. Gaur was forced to give a dissenting note.

Later, Gaur wrote to P V Narasimha Rao, the then Prime Minister: "The dynamic response of the dam to a real earthquake accelerogram was tested without appropriately scaling the duration of strong ground shaking to about 30 seconds, which would be more representative of the Tehri situation. The test clearly showed that the deformation of the dam continued to increase right uptil 12 seconds when the test was terminated, and would have perhaps maintained this trend for longer if the test had been allowed to run for the full 30 seconds. It is, therefore, difficult to imagine as to how the dam structure would have suffered continued strong shaking for a further duration of 18 seconds. Thus, it can be seen how the conclusions offered by the consultants, by the very deficiency of critical discussion of these assumptions and shortcomings have misleadingly assumed the status of a scientific truth.'

Huge protests from the local people forced the government to set up yet another committee to look into the safety aspect of the Tehri dam in 1996. This committee was headed by Gaur. This group, in 1998, recommended that the government should conduct further studies