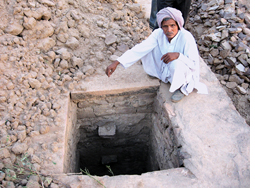 Rajasthan's Karauli district has been reeling under droughts for the last four years. To tackle this, people of this region are reviving pokhar -- a 200-year-old traditional water harvesting system.
Which is why, Prakashi Devi's village has water this year. Prakashi Devi is happy her village pond still has some water left. "A little bit of water is good news,' says the 40-year-old villager from Kaila Devi gram panchayat.

Rajasthan's Karauli district has been reeling under droughts for the last four years. To tackle this, people there are reviving pokhar -- a 200-year-old traditional water harvesting system. Which is why, Prakashi Devi's village has water this year.

Pokhars are ponds with 1-2 metre high embankments built of loose stones and earth on an elevated part of the village. They are fed by surface runoff from the surrounding catchment and help recharge ground water levels (see diagram: Recharged). Stored water from the pokhar is channelled out from kothis (outlets). Pokhars irrigate agricultural fields downstream. An average size pokhar can irrigate 2-4 hectares (ha), while the large ones can irrigate up to 15 ha.This water harvesting system used to help villagers tackle water scarcity in summer, irrigate crops and provide fodder for cattle.

Found mostly in areas with ravines and rocky topography, there are about 2,000 pokhars in Karauli and Sapotra blocks of Karauli district. However, most of these have either silted up or have been breached due to years of neglect, partly because successive droughts had affected villagers that they couldn't afford to maintain and repair their pokhars.

Kinshuk Ram of Lakhroopi village says that the lack of functional rainwater harvesting structures has had a serious impact on local agriculture. A pokhar would help him harvest kharif crops, if the rains fell, he could even grow wheat during the rabi season. Now, every year the region sees mass migration of men and cattle during summers due to lack of water and livelihood options.

But this pattern is slowly changing. Realising the importance of these traditional structures, the Society for Sustainable Development (ssd), a Karauli-based ngo started reviving pokhars in the district during 1997. The outfit roped in local communities, asking villagers for their inputs and financial assistance. Villagers were initially suspicious and resistant to an external agency helping them revive this tradition, but ssd soon won their trust, says Ram Sumer Meena of Lakhroopi, who helps ssd in their activities. The ngo provides half the cost of reviving a pokhar owned by an individual, and 25 per cent of the cost for community-owned structures.

In villages across the district, watershed development committees were set up to run the revival project. Within the first year of the project's implementation, pokhars supplied water to 130 ha in the district, increased the yield on this land by 65,000 kg. Badri Meena of Lakhroopi village, for instance, invested about Rs 4,000 to repair a pokhar in his village back in the late 1990s. Within a year of the pokhar's revival, he grew 1,800 kg of paddy and straw worth Rs 10,000 on his 2-ha plot.

"The revival of these structures is crucial for coping with drought,' says Ganpath Mina, Lakhroopi village sarpanch. "Digging new ponds and check dams will help fight water scarcity to some extent, but when the rains fail these structures are useless. The old water harvesting structures, which are a part of the landscape, should coexist with the new structures.'

Encouraged by ssd's success, there's now talk of using the National Rural Employment Guarantee Act (nrega) for a large-scale revival of pokhars in the district."The act has the potential to provide livelihood security and control migration,' says ssd executive director Arun Jindal. Though the district has given priority to water conservation, building check dams and digging new ponds only entail higher costs, he says. A farmer can't even till land near check dams. Repairing traditional structures are better investments, since they not only provide water but also decrease soil erosion by providing conditions for vegetation to grow.

The benefits of constructing such structures are quite high and generally the investment can be recovered in just about a year.