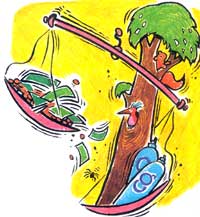 HOW DO you value a tree? Do you account only for the timber and fruit that a tree bears or are there other intangibles that have a value, for instance, the carbon dioxide that the tree fixes, the oxygen that it releases, the soil erosion that it checks or even the shade it provides? If this is so, how should economists measure these?

In India, work on this is sketchy, if not primitive. In 1980, T M Das, head of the department of agriculture at the University of Calcutta, published an article in a little-known journal of the Eastern Forest Rangers College in Kurseong entitled 'The Value of a Tree'. In the article, he calculated the value of the environmental services provided by a 50-year-old tree. The figure was astronomical -- a single tree was worth Rs 15.7 lakh.

To calculate this, Das took six different parameters from production of oxygen to shelter provided to birds, squirrels, insects and plants and assigned monetary values to each. For instance, he calculated that at least one tonne of oxygen is produced by a 50-tonne, medium-sized tree and, if one was to buy this oxygen at market rates, it would cost Rs 5,000 per year.

Or that a tree shelters, on an average, 10 pairs of birds and squirrels and insects and, if we were to rear these animals and insects, the yearly maintenance cost alone would be at least Rs 5,000. Or that a tree recycles an enormous amount of groundwater through transpiration from leaf surfaces. If an equivalent amount of water was to be drawn from underground reserves, it would need a large centrifugal pump whose running costs alone would amount to Rs 6,000 annually. Adding all these, and more, Das comes up with his value of a single tree.

While all this may be acceptable as a back-of-the-envelope calculation, undertaken to stimulate debate, obviously no serious economic planning can be done on the basis of this estimate. But this is exactly what has happened.

A few years later, H N Mathur, a conservator of forests, and R Soni, a research officer at the Forest Research Institute, Dehra Dun, reworked the values. They took the average tree density found in different forest types and simply multiplied with this the value of each tree as calculated by Das. By doing this, they valued each hectare of tropical forests at Rs 141.30 lakh, and each hectare of temperate forests at Rs 94.2 lakh.

In 1990, J B Lal, director of the Forest Survey of India, prepared a paper on the economic value of India's forest stock. Lal took the area under various forest types in India and calculated, on the basis of the estimates made by Mathur and Soni, the cost of all the forests in India. According to his calculations, the annual rent from cost of environmental services works out to Rs 56,680 crore.

But this was not all. These figures have been used by the ministry of environment and forests (MEF) to calculate the environmental costs of development projects. For instance, when the MEF did its cost benefit analysis of the Narmada project, it arrived at a fantastic figure for the value of forests in the catchment. The reason was simple. It was based on Das' work and that done by Mathur and Soni. No further work has yet been done to take these rough, very basic, figures to their logical conclusion.