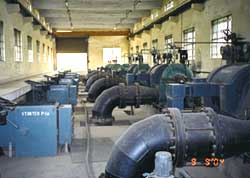 The government's favourite strategy is to construct sewage treatment plants (stps). The rush began in 1995. First, there was a plan to build and make operational 14 stps by 1997. In 1998, another two were contemplated. By 2000, 8 were under different stages of construction. By October 2000, Delhi's chief secretary reported to the court that 9 stps were functioning against the 16 to be constructed. Sewage treatment had also increased, from 990 mld to 1,400 mld by June 30, 2000, he said, assuring the court that by March 2001, with five more stps functional, the city would treat 1800 mld waste.

This, he deposed, would help solve the problem, as the percentage of untreated sewage discharged into the river would decline from 63 per cent in 2000 to 34 per cent by 2001, 20 per cent in March 2003 and 5 per cent by March 2005. The plants certainly got built. Today, Delhi's 17 stps have a treatment capacity of 2,330 mld. The problem is that nobody quite knows how much sewage the city generates. If the sewage generation estimate of the Central Pollution Control Board (cpcb) is used