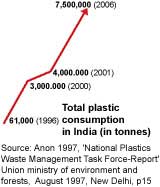 If the annual plastic consumption in India rose by as little as one kilogramme per capita, the total demand would increase by about one million tonnes. The plastic industry looks forward to encashing this market potential. High profits and increasing demand ensure it grows exponentially