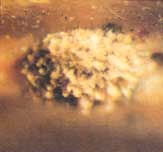 THE notorious Indian sweet tooth is on a survation diet: red rot, an infectious fungal disease that has devastated the sugarcane crop in western Uttar Pradesh, has left the nation dreadfully short on sugar - at a time when it should be pouring into the domestic market to feed the line-up of forthcommg festivals.

In the past 2 years, the fungus has knocked the farmers of this prosperous sugar belt into the red. The damages, emimated by various authorities like the sute Sugar Commission, the Indian LO buitute for Sugarcane Research (11SR) at Lucknow and the State Sugarcane 1knearch Centre (ssjc) at Shahjahanpur, uary widely between 20 to 70 per cent of dw.staDding crop in the districts of Hwidwar, Saharanpur, Muzaffarnagar, Werut, Bulandshahar, Ghaziabad, Ahgarh and Mathura. In fact, it is estimated that in the Ghaziabad and Bulandshahar districts, the loss is over 70 per cent.

In 1990-91, the sugar belt in western Uttar Pradesh had oduced 55 million tonnes (MT) ofthe national production of 0 %IT. In 1991-92, the production dropped steeply to 40 MT. the time the directorate of agriculture comprehended the magnitude of the problem, the rot was well on its way to entrenchment. Says 11SR scientist Narinder Singh, "Random sampling indicated the incidence of red rot up to 80 per cent in Daurala, Surani, Machhar, Dantal, Dabathua and Bulakpur villages in Meerut district."

The primary reason for the e idemic was the use of disease-prone varieties; in the absence of research on new varieties, these the in are ones vogue. The sugarcane varieties co 1148 (bred at the Sugarcane Breeding Insti- tute, Coimbatore) and coi 64 (bred by R S Kanwar,,director for Sugarcane Research at the Jalandhar-based Sugarcane Research Station of Punjab University) are the2",most popular varieties cultivated by farmers of this region.

Till some years ago, sugarcane was only grown by landlords with sufficient financial wherewithal to leave the crop standing for over a year. Since these landlords are relatively few and far between, sugarcane fields were so scattered in the countryside that they contained the spread of the infection. But with attractive support prices for sugarcane over the last 2 decades, the crop found favour among smaller peasants, leading to an unprecedented demand for sugarcane seed sets.
Rotten complacency Sugarcane is planted through "sets", about 33 cm-long portions of mature sugarcane plants treated with fungicide and exposed to heat for over 4 hours in a specially-made heat chamber. The sets are supplied by government agencies and sugar mills. The burgeoning demand caught both sources napping, and many farmers planted untreated sugarcane. Red rot, meanwhile, lay low, and untreated sets increasingly found their way into the fields. With more areas being reserved for cultivation, the scene was set for the sleeping scourge. Another factor responsible for the spread of the fungus is the continuing lack of field drainage. A sin- gle heavy shower is enough to undo a season"s crop. Explains Prem Kant Dubey, deputy commissioner, Uttar Pradesh Sugarcane Commission, "We have been told by experts to avoid standing water, but since the farmer is always more interested in water for his plants than in drainage, the policy is to provide canals."
Fungicides fail Often enough, even fungicides fail to act simply because they are applied too late to combat the rot. Also, since the sugar mills are more interested in the amount of sucrose that can be extracted from the cane, farmers are encouraged to grow the 2 favoured but susceptible varieties, both of which have a high sucrose content. (Interestingly, scientists reveal that attempts to breed varieties with a high sucrose content invariably end up breeding a plant vulnerable to diseases, particularly red rot). Says 11SR director G B Singh, "Attempts to increase sucrose content in sugarcane have failed as one of the primary considerations for releasing a variety is its resistance to the red rot."

Adds IISR biochemist V P Agnihotri, "Since no sugarcane variety is totally immune to red rot, we have no foolproof option to tackle the problem. Our best recourse is to depend on varieties that are said to be resistant to the fungus. Apart from this, the agricultural extension workers have to educate farmers on the essentials of managing red rot."

The 2 popular but susceptible varieties have pedigrees so long that they are-crumbling: they have been around for over 2 decades and have undergone considerable "genetic erosion" (simply put, ageing, or entropy). Although many farmers have begun cultivating other sugarcane varieties like BO 91, cos 767, cos 837, cos 8315, and cos 7918, which are more resistant to the fungus, the majority still prefers the popular breeds. It is not just the sugar mills that eagerly accept these varieties. Many small farmers cultivate them for the sole purpose of selling the lot to roadside cane crushers, who prefer these varieties because of their lower fibre content and higher juice-yield.

The shortage of sugarcane has the sugar mills waffling piteously. Although many of them had obtained government permission to increase their crushing capacities, the sugarcane they procured fell far short of their minimum requirements. As a resullikmany mills were forced to stop production by the end of FelTruary this year, about a month in advance of the usual closure time. Says the procurement manager of Lakhimpur"s Bajaj Hindustan Sugar Factory, Nirmal Singh," "We had our crushing capacity doubled to 5,000 tonnes per day. But we had to abort the project in early March due to the unavailability of cane."

The mills have begun to take some initiatives on their own. Employees of the Yamunanagar-based Saraswati Sugar Factory have been sent scouting to villages to identify diseased plants. The factory"s cane manager, Anoop Singh Narwal, said that once his staff spot an infected field, they persuade the farmer to destroy the crop. He says, "We contpensate the farmer by paying him tht amount he would have got had he sold the lot to us." Not always is dw persuasion logical: NanVA unabashedly revealed that the farw is sometimes "persuaded" not to cultivate the crop for at least 3 years with superstitious arguments on how evil could befall him and his famihr "We want to ensure that not a trace of the fungus remains," says Narwal.

As the rot continues to blight tht the fructifying countryside) 11SR scientists are pathogen to evolve a strategy to counter dw menace. According to them, the application of fungicides is not very safe as they decimale many other fungal spores that play an important role in mam taining soil fertility. Jawahar Lal, 11SR"s head of the departme of crop improvement and genetics, says that breedins programmes will have to focus on indigenous sugarcane vark eties like Saccharum spontaneum and Saccharum robustum. which are highly- resistant to diseases. According to him, the 3,000-plus sugarcane germplasm available with the Worw Sugarcane Gene Bank at the Sugarcane Breeding Institute"s Cannanore station in Kerala can be exploited to breed varietm that are resistant to red rot while providing pnough sucrose.

Tough clones
Interestingly, in their search for high ucrose varieties, IISR entists have identified 2 clones of IS robustum, which have sucrose contents as high as 11.25 and 12.53 per cent. The compares favourably with the 11.40 and 10.65 per cent ad sucrose in coj 64 and co 1148. 11SR kientists are currend? studying the ability of these varieties "to resist pests and dt& eases. According to Singh, another. altern a-tive is to overcome the problem of the genetic erosion"of co 1148 and coj 64 b? breeding them all over again, taking advantage of new tecik. niques like tissue culture.

While setting the research agenda for institutes like tbo, 11SR, the industry often had the final say in development despite the fact that the 6 contribute almost It towards the institutes" budgets. Four years ago, the Wstry provided a mere Rs 22 crore as research grant to aw out of the sugar development fund (SDF), a collective d instituted by the Union government to improve Wcane varieties. There are allegations that instead of being d as"a grant for the R&D agencies, the SDF is often used by sugar industries to manipulate them through selective allocation.

Right now, the 11SR has just one scientist working on irnous alternatives - like jaggery or gur and khandsari - obite crystalline sugar. This is despite the fact that over per cent of the requirement of sweetening agents in India is 1by these prod%cts. Moreover, the gur and khandsari sector exploit every component of the crushed sugarcane juice, ke the sugar industry that uses only sucrose.

And yet, if the government has its way, the production of and khandsari could well be banned. The Union governit did announce a ban in July this year on their production, later it was revoked in the face of stiff opposition. The ision was ostensibly aimed at forcing more sugarcane to d towards the sugar mills, given that last year, the gur and ndsari manufacturers were able to attract more sugarcane wers with spot payments.

Aghast at the havoc wrought by the fungus, the departim of biotechnology has provided the 11SR with Rs I crore to By the fungus. 11SR biochemists V K Madan and Agnihotri r already identified certain types among the fungus that are virulent and are incapable of producing the enzyme inver!which breaks down the sucrose in the cane (See box: How ow sets in). The scientists feel that if such a strain can be 16red with the prevailing virulent types, they might be able me it like a vaccine against the fungus.

Notwithstanding scientific experience, the state government"s cane co,mmission persists in the notion that the magnitude of the problem is being blown out of proportion. The head of t "he commission"s department of cane pests and diseases, H N Yadav, however, ascribed the huge difference between the estimates of scientists and the industry and the department"s statistics to the lack of adequate knowledge of the disease. "None of the department staff are trained to recognise a diseased plant from a healthy one," he admitted.

Homegrown remedies
A few farmers have found ingenious ways to suppress the fungus. Amar Pal Chouhan of Bahadurgarh village in Ghaziabad district squeezed out 100 tonnes of sugarcane per hectare (the average productivity is around 180 tonnes per ba), even while the neighbouring fields rotted away. Chouhan"s feat is all the more remarkable because he grew the coi 64 and co 1148 varieties. He had resorted to the "ring method" of planting sugarcane, devised by R L Yadav, chief agronomist with the 11SR. In the ring method, the roots of the canes are able to absorb water more rapidly because the number of sets sown is 3 times that sown in the conventional method. This leaves too little water standing in the field to do much mischief.

Another method of restricting the fungus is "green manuring" - growing pulses and oilseeds till the red rot rots itself to death. If a farmer discovers an infection, he uproots the entire crop and bungs in the "green manure"; apart from adding nitrogen to the soil, pulses and oilseeds also extrude chemicals fatal to the fungus. Both Agnihotri and Narinder Singh con- firm that this phenomenon was first discovered by farmers over years of casual observation.