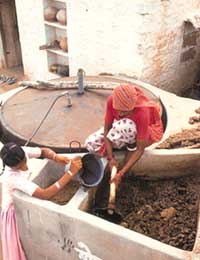 
Solar energy is by far the best option for remote areas where connection to the power grid is not viable. Solar photovoltaic (spv) technology enables the direct conversion of solar energy into electricity, while solar thermal technologies tap solar energy for thermal applications like water heating, cooking and power generation. Though technological developments in spv have been impressive, the high cost of the silicon wafers used in the solar pv modules hinders the development of solar energy worldwide. An investment in spv requires about Rs 30-40 crore per mw as compared to thermal power, which is about Rs 4-6 crore per mw. "Till a technological breakthrough is achieved, solar energy will remain viable only for inaccessible areas. There will be no mass production and distribution will be niche-based," says P V Ramana, assistant resident representative, United Nations Development Programme (undp).

Prices of spv has fallen globally - by 5 per cent each year over the last 20 years. But the problem is that the price of fossil fuel energy has also fallen over the same period. spv remains uncompetitive without large investments in research to cut costs. Researchers in Japan, Germany and the us are working to reduce the cost and increase efficiency of solar cells. According to an assessment done by Greenpeace and the European Photovoltaic Industry Association, the capital cost of installing a pv system ranges from us $5-12 per watt. As a result, the life cycle costs for pv generated electricity ranges from us $0.25 kilowatt hour (kwh) up to us $1 kwh.

In India, the pv cost has declined from Rs 225 per watt in 1992-93 to Rs 160 per watt in 2002, says B Bhargava, director, ministry of non conventional energy sources (mnes). "However, as long as silicon is used as a raw material, the lowest limit would be Rs 120 per watt," he adds. Currently r&d is focused on thin film alternatives, which are more suitable for making solar cells and can help to reduce the price to Rs 40-60 per watt.

India is a manufacturer of solar cells and modules - in 2000, it produced 31 mw and domestic production is expected to cross 100 mw during 2002. To protect the domestic manufacturers, government imposes an import duty for wafers (cells) and finished solar panels in the range of 15 per cent. Even while the cost of solar panels is decreasing globally, this advantage is not fully reflected in India, says Harish Hande, managing director of selco, a Bangalore-based solar energy services company.

Over the years, thousands of solar lanterns and lights - typical lantern is 10 watt module with a battery designed to work for about 3-4 hours a day - have been installed across the country. If it runs well, solar lantern can save 100 litres of kerosene each year. Power generating systems - stand alone or interactive with the grid - hold a tremendous technological opportunity. The most remarkable are the nine power plants with combined capacity of 252 kw in Sagar island and Sunderban area of West Bengal. Here each plant provides electricity to 100-120 households.

Solar thermal heating systems are also becoming popular in industries, hotels and hospitals. For instance, the Kerala-based Casino Group of Hotels, with hotel chains dispersed in many south Indian states have installed solar thermal water heating systems with a total capacity of about 43,700 litres per day. Says Jose Dominic, its proprietor: "We use solar thermal water heaters not only because it is environment-friendly, but because it is also very economical." A study done by Solar Tech, a Cochin-based agency, shows that heaters save 717,373 kwh of electricity amounting to Rs 55 lakh per year.

On the other hand, solar cookers have not fared well, mainly due to the availability of other energy options, the need for cooking outdoors and their bulkiness. "The solar cookers failed mainly because the ministry focused on design specification, rather than performance," says Ashok Khosla of Development Alternatives, a Delhi-based non-governmental organisation (ngo).


This clean, cheap and efficient energy, which contains about 55 to 70 per cent methane, is one of the most widely disseminated technologies. “This is a proven technology and is one of the most successful programmes undertaken by the mnes,” says Ramana. Under the National Project on Biogas Development (npbd) programme, mnes promotes family-type biogas plants and has a small component of community plants. The most popular design is the Khadi and Village Industries Commission model, with a floating metal drum. A low-cost variant, called the Deenbandhu model with a bottom made of concrete and dome of ferro-cement, is gaining ground. A standard biogas plant costs between Rs 8,000-10,000 and generates 2 cubic metres of gas per day.

Though tremendous progress has been made in this technology, the water intensive nature of biogas is a hurdle for many parts of the country. The technology requires equal amount of water and cattle dung with temperature about 30