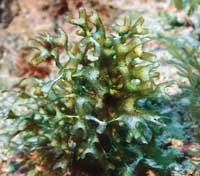 Scientists recently discovered a new species of fish and seaweed on a Caribbean coral atoll, which they claim might be the most diverse marine habitat in the Atlantic region. Two new species of goby fish, each about half-inch long, and a dozen new species of seaweed were found in a two-week study on the Saba Bank Atoll in the Dutch Windward Islands, about 290 km southeast of Puerto Rico. The new species were found by a joint expedition of the Netherlands Antilles government, the US Smithsonian Institution and Conservation International. The community of about 1,500 people on nearby Saba Island derive a large part of its economy from the atoll, and the atoll is being damaged, said Paul Hoetjes, a marine biologist with the ministry of nature affairs of the Netherlands Antilles. Leroy Peterson, a Saba fisherman, expressed hopes of tighter controls on tankers and other ships.