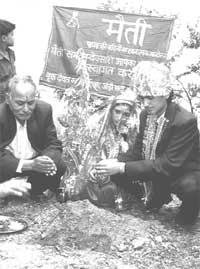 marriages in Gwaldam, a small town in Uttar Pradesh's Chamoli district, are not only about tying wedding knots. When a girl leaves home after marriage, she leaves behind something valuable for her parents. In Gwaldam, it's a tree for them to nurture in the way she had been until her marriage.

Known as Maitee (literally meaning myaka or the girl's home), this scheme was started in 1994 by Kalyan Singh Rawat, a biology teacher in the Government Inter-College, Gwaldam, with an objective to conserve forests. Maitee has now become a part of local custom. No one understands the relationship between the environment and women's work burden more than the women themselves. Shortage of fodder, firewood and water means more work for them. And Maitee's success is attributed to this understanding of jal-jungal-zameen (water-forest-land).

Maitee is an organisation run by unmarried women. A girl, who is both intelligent and efficient, is chosen to run the organisation. She is called the baddi behen (elder sister) and the other members are called maitee behen . They work throughout the year, but during the marriage season their work load increases. Every girl plants, mainly fruit trees, in her house. Depending on the climatic conditions, other varieties may also be grown.

As soon as a marriage is fixed in a village, these women take charge. It is the responsibility of Maitee to check the plant. A suitable place is chosen near the bride's house and a time is fixed for the tree-planting ceremony. A priest conducts the ceremony during which the bride hands over a sapling to the groom who plants it. The bride's parents then give some money to the Maitee behens . "Involving a priest helps in spreading this concept to other villages,' says Rawat. And the money given to Maitee is deposited in a post-office bank under the name of the organisation. It is the only source of income for Maitee.

However, the Maitee's responsibility does not end here. After the marriage is over, the group looks after the newly-planted tree. "The responsibility is being taken by their parents also as an emotional attachment exists,' says Rawat.

Tree-planting ceremonies during marriages are mostly meant for elder girls. But adolescents are also actively involved in the programme. They also plant seedlings but since marriage for them is a long way off, the Maitee Van (forest) programme has been launched for them. Every year, during the monsoons, a day is fixed when seedlings tended by adolescents are planted in a deserted area. This is done after permission is taken from the village pradhan (chief) and the Mahila Mangal Dal (a women's welfare organisation). "This will help in creating a dense forest after some years,' says an excited Rawat.

Maitee is fast spreading to other villages in this hilly region. In May-June 1997, about 310 Maitee-trees were grown in Gwaldam. Says Jagat Singh of Munsyari, Pithoragarh district, "Now people have started mentioning