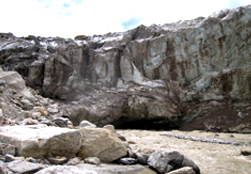 This paper presents a method for deriving the snowline altitude using a combined analysis of terrain elevation and multispectral Advanced Wide Field Sensor (AWiFS) data from the RESOURCESAT-1 satellite, launched by India on 17 October 2003. AWiFS is a unique instrument capable of acquiring imagery of the world repeatedly every 5 days with very high radiometric resolution.

It provides a wide swath width, which is very useful for snow-cover mapping. Snowline altitude is a good indicator of snow coverage. Snowline altitude for the period from October 2004 to June 2005, and from October 2006 to June 2007, is determined for the Baspa Basin, which is located in the Kinnaur district of Himachal Pradesh, India. It is observed that snowline altitude is generally higher during the year 2006/07 than during 2004/05, except in December 2006 and March 2007. The results obtained with the
analysis presented here are validated using available meteorological data and are found to be satisfactory. This thus establishes a method that can be applied to other terrains and over longer periods of time within the coverage of the AWiFS sensor data.