'We can rule ourselves' 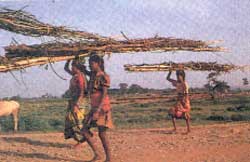 RAGHUNATHPUR is a large village of 350 households in the Chanho block of Ranchi district. It lies 55 km from Ranchi on the road to Lohardagga. Though Oraons comprise the majority of the population, this multi-religious village has many non-tribals as well.

Being an Oraon village, it was governed by Oraon customary laws. The mahto and the pahan were the village headmen. The office of the mahto was hereditary, while that of the pahan was through a triennial election from within the pahan khunt. A mahto could be dismissed for refusal to do service or for bad conduct.

In 1986, the villagers led by Shanti P Minz, a former armyman, who has seen action in the Northeast and in Sri Lanka, formed the Raghunathpur Ekta -- a revival of the baisi (village assembly). They were inspired by Ranchi lawyer Rashmi Katayayan.

The immediate motivation to unite was to save a 15 ha community forest from a usurper, Tejnarain Singh, a Rajput from a neighbouring village who claimed the forest on the basis of false documents. The Raghunathpur Ekta filed a suit against him. Guard was mounted on the village to prevent the hacking of the forest by Singh's goons. Even the women joined in. The case was won by the villagers in 1991.

The forest is lush and green, full of precious sal and other trees. Using the issue of the forest, the Raghunathpur Ekta formalised the gram sabha structures: the gram sabha meets on the first Thursday of every month. Each household has to send a representative to these meets and defaulters are fined Rs 10. The gram sabha decides all issues relevant to the village. It has an elected executive committee of 11 members who enjoy five-year terms. However, if anyone is found to be corrupt or inefficient, he or she can be dismissed immediately.

There is a village fund to which each household pays Rs 30 per annum. Cutting of trees from community lands is banned, so is grazing. Disobeying community rules leads to a minimum fine of Rs 50. But more than that, says Shanti Minz, "it is the public humiliation that deters would-be offenders".

Cutting of branches and collecting leaves is prohibited. Branches from the sarna can be obtained for social ceremonies with permission, on paying a fine of Rs 25. Not more than three branches, that too from the main trunk, can be cut.

All the households pay an annual jungle bandi chanda (protection fee) of Rs 5 along with 2.5 kg paddy, which is used to employ three guards round the year. While no formal village rule exists for cutting trees on private lands, permission has to be got from the government to cut green trees. The Ekta ensures that people follow this rule, but only after efforts to dissuade them from cutting trees fail.

The Raghunathpur Ekta regulates social life too. There has been no court or police case after 1986. The gram sabha judges all cases, ranging from family feuds to poultry stealing. It is also making efforts to get earlier cases withdrawn.

The village has prospered under the watchful eyes of the gram sabha. Milk is extremely scarce in the region because the cows no longer have access to herb-rich forests. But in Raghunathpur, the forests have come back and so has the milk.

The villagers proudly compare their rich forest to the Opa protected forest which has a few mangy sal trees and lots of eucalyptus. "The forest officials say they cannot grow sal. Let them come to us. We will teach them. They could plant sindhwar (Vitex negundo) instead of eucalyptus. Give us the space and we will show them. We can rule ourselves," is their constant refrain.

Yet in Ranchi, JMM lieutenants have not heard of Raghunathpur's brave experiment.