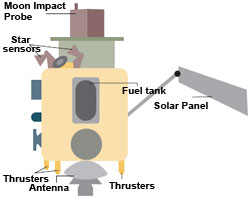 indian space agency isro is yet to release its final report on the early death of its moon mission Chandrayaan, but speculations abound about the cause. One of the explanations is the late decision to carry a probing instrument in the spacecraft. In the original plan the spacecraft was to just orbit the moon. The decision to make the instrument with an imprint of the national flag land on the moon was an afterthought.

It was former president A P J Abdul Kalam