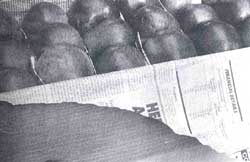 Though Kumar withdrew the subsidy in spite of opposition from the state's apple growers, he felt giving in to the World Bank would make him vulnerable to Congress charges that he had bowed to World Bank pressure. The recent dismissal of his BJP government has thrown the ball in the Congress court.

Kumar reportedly was willing to lock horns with the World Bank because he had hopes of reaching agreements with France and Italy on financing apple marketing and processing in Himachal. The French had put in their proposal almost three years ago Shanta K and had even conducted a survey. French reluctanc embassy sources claim,"We are still waiting for state Rs 1 feedback from the state government. "

Shanta Kumar's hesitation in putting anything on paper possibly stemmed from fears of a political back- for lash. The apple lobby crucial vote bank. In fact, Shimla and Kulu witnessed widespread unrest when the subsidy was withdrawn, with the opposition Congress protesting the World Bank's terms and conditions.

The support price for apples has been drawing attention mainly because of the huge sums involved '. The support system first came into effect in 1975-76 when, due to a glut in the market, prices crashed. Widespread hailstorms resulted in the piling-up of huge, low-grade, culled apple,stocks, which worsened the situation. Culled apples are damaged apples that are not market-worthy, but are used, among other things, for producing juice. Under the subsidy, the apples were bought at 80 paise per kg, with Himachal Pradesh Produce Marketing and Processing Corp (HPMC) acting as the nodal agency for apple procurement.

Since then, the support price has been fixed at varying rates, as electioneering in the apple belt has always revolved around the fruit. Shanta Kumar's Congress predeces- sor, Virbhadra Singh, also exploited the issue to his advantage by raising the support 1price of apples to Rs 2.75 a kg just days before the 1991 elections.

In fact, just before the withdrawal of the subsidy, then Central agriculture minister Devi Lal announced a market intervention programme to share the losses incurred by cost the apple-growers with the state government.However, this fell crore through and led to a drastic cut in Central subsidy, prompting Shanta Kumar aid finally to withdraw -it. justifying the decision, state agriculture secretary, develop- Attar Singh commented, "The apple industry can look after itself."