Are your organs in the right place? 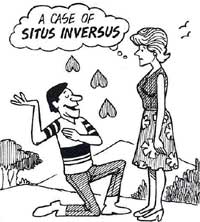 IF YOUR heart is in the wrong place, perhaps a gene is responsible for it. Researchers have recently identified a gene that plays a major role in deciding whether the internal organs in mice should be assigned to the right or left of the body and this has initiated the search for similar genes in human beings (Science, Vol 260, No 5108).

The discovery throws light on one of the most intractable problems in developmental biology -- what determines the asymmetrical positioning of internal organs. It also has implications for human health because about one in 10,000 people are born with a particular condition called situs inversus, in which the left-right positioning of internal organs is the reverse of what is normal. Such people are prone to heart and lung complications and are often infertile.

Medical research into this condition had made little progress till Paul Overbeek and Takahiko Yokoyama at the Baylor College of Medicine in Houston discovered by pure serendipity the gene that appears to play a role in the mysterious process of positioning of internal organs. The two scientists were trying to create pigmented mice, by injecting a gene which is involved in the synthesis of a pigment, into embryos of albino mice.

Most of the mice that developed from these embryos died, but autopsies revealed all mice with two identical copies of the pigment gene had their stomachs on the wrong side of the body. Of these, 95 per cent had their hearts and spleens on the wrong side. Further studies revealed the pigment gene was interfering with another gene that controlled the placement of organs. The scientists are now trying to work out how these genes interact, while others are looking for more genes that are thought to be involved with placement.