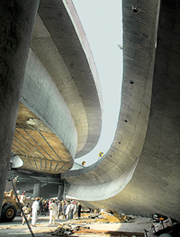 The collapse of the Northern Bypass bridge in Karachi that killed nine people has brought into focus the issue of public accountability of military agencies involved in development projects in Pakistan.

Barely a month after it opened to traffic, the bridge, on the Pakistani Rs 350-crore (us $58 million) bypass, built by the military-owned National Logistic Cell (nlc) and the National Highway Authority (nha), collapsed on September 1, leaving officials scurrying for excuses. Strangely, the contract to build the bridge was awarded without bidding.

The Ministry of Communications had found flaws in the design of the bridge a year ago and recommended its reconstruction, says communications minister Shamim Siddiqui. But instead of rectifying the fault, nlc hired Belgian consultants on whose recommendations steel sheets were inserted in the bridge.Mohammad Noman, an associate professor at Karachi's ned University of Engineering and Technology, said, "In June 2006, while placing a pre-stress box girder it was noted that it remained above one of the pads. Specialists said the affected portion had to be dismantled. But strangely enough, nha did not force the contractor or the consultant to remove it.'

"The cause of the collapse of the Northern Bypass flyover was a combination of flawed design and the absence of a regulatory structure to ensure that possible construction shortcomings are rectified without exposing the public to risk,' says architect Arif Belgaumi.
Escaping responsibility Fixing responsibility for the mishap, however, is not easy. City Nazim (mayor) Syed Mustafa Kamal quickly clarified that the City District Government Karachi (cdgk) had nothing to do with the construction of the bridge.

Belgaumi points out that an effective regulatory agency is necessary to enforce standards of public safety. "In the absence of such agencies and with the involvement of autonomous military organizations, which perceive themselves to be above the law, the whole concept of public safety and welfare gets tossed aside,' he says.

What complicates the matter is that there is no single administration in Karachi. Thirteen agencies, including cdgk, are involved in overseeing the affairs of the financial hub of Pakistan.
Military might But why was the contract awarded to a military organisation