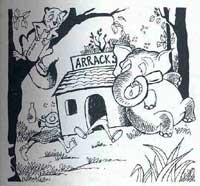 Conservationists in Kerala want to ban an arrack shop located in the heart of the Chinnar wildlife sanctuary because it endangers the grizzled giant squirrel (Ratufa macroura dandolena). The Idukki district sanctuary is one of only two places in India where the giant squirrel exists.

Wildlife lovers contend the land on which the arrack shop is situated should have been acquired by the forest department when the Chinnar sanctuary was declared a protected area in 1984.

A 1991 study conducted by K K Ramachandran of the Kerala Forest Research Institute indicated the arrack shop and the clear patch of land around it formed a break in the continuous tree cover required by the giant squirrels. Local forest officials also find the arrack shop disturbing because it is an area in which elephants forage for food. Last summer, elephants destroyed the shop, but arrack selling is so remunerative the shop was resurrected by the licensee, whose address, curiously, is the same as that of the local forest department checkpost.