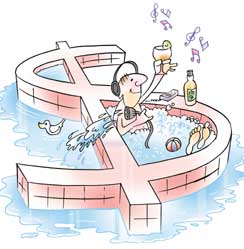 Energy Australia (ea), electricity and gas supplier to over 1.4 million families in Australia, brought out in late October that people spend more time in showers, which adds to their annual power bill by almost Australian $100. Their research found that 4.21 minutes is the average time for each shower. But it increased significantly when the shower included activities such as singing or even listening to music (see graph: Slippery when wet).

As a strong energy-efficient marketing strategy, ea decided to send shower timers for free to half a million families in Sydney, the Hunter Valley and the Central coast. However, the fact is shower timers are not just for energy efficiency. Limiting water usage fits in the larger scheme of things.

Besides, low rainfall has affected southern and eastern Australia and the situation has been abysmal since August. On November 3, the Bureau of Meteorology announced that southern parts of Australia experienced the driest August-to-October period since 1900, also being the third driest for New South Wales (nsw) whose state-average was boosted by above-normal rainfall along the north coast.

The larger perspective The domestic usage accounts for 16 per cent of the total water consumption in Australia. But in Sydney, capital of nsw, households demand 70 per cent of the metered water supplied. To address this, the government and the construction industries released a technical manual as Australia's guide to environmentally sustainable homes in 2003.

Showerheads were listed as one of the several water-saving initiatives. It is argued that an inefficient shower can use more than 20 litres/minute of water while a unit with an aaa fitting