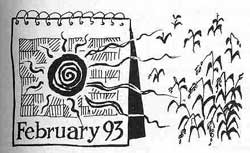 A dry winter followed by the highest temperatures recorded in February in the north Indian plains in the past six decades led to fears in state agricultural departments that rabi crop yields would be cut drastically. Wheat, gram, pea, barley and mustard - the traditional winter crops grown in Punjab, Haryana, Rajasthan and western Uttar Pradesh - all need low temperatures for a good yield.

Wheat needs temperatures of between 30 C and 16 C till mid-March, while the other crops need similar temperatures till mid-February. This year, February temperatures were in the high 13-35 C range. Agriculture department officials in Haryana and Punjab estimate the crop damage at between 40 and 45 per cent.

But Krishi Bhawan officials dispelled such fears as premature and alarmist. Senior agriculture ministry officials in New Delhi said a sudden temperature rise in March would be more damaging for the crops. They said an unusually warm February was not worrying at all and there would be no effect on crop yield.