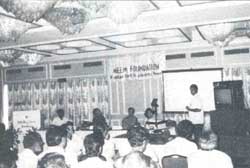 That eponymous Indian herbal cure-it-all, the neem, could provide the world with thrice its requirement of pesticides. But over 100 Indian entrepreneurs who attended a day-long workshop on neem plantations organised in Bombay by the Neem Foundation in the 1st week of May found the industry-research interface paralysed by static, even as industry prepares to dig its hoe into the business.

Government officials involved in promoting neem cultivation and plantation admit that what is missing is a proper census report on the tree population, and a usable "superior" clone. Bombarded by profit figures ranging from the fantastic to the banal, incomplete data and material -- essential for investment planning -- the workshop crumbled from sheer lack of gravity.

Of the world pesticide market of us $6 billion, neem-based pesticides contribute about us $100 million. "Although synthetic pesticides cannot be done away with entirely, the neem seed produce from India has the capacity to cater to a pesticide market worth us $20 billion," claims R P Singh, entomologist at the Indian Agricultural Research Institute, Delhi.

The problem with finding a "harvestable" clone, says Venkatesworlu, senior scientist at the Central Research Institute for Dryland Agriculture (CRIDA), Hyderabad, "Different varieties of the tree have different yields. Also, some of these varieties are not as susceptible to pests and diseases as compared to the others."

Further, says G R Korwar, also of CRIDA, "The only known existing blocks of neem trees are with the forest department, that too not on a plantation scale. But there have been no concerted studies at these places."

The sad fact is that only a little over 20 per cent of the country's neem seeds are collected for industrial use. Says R L Rajak, executive director of the National Oilseeds and Vegetable Oil Development Board, "Of the estimated yield of 500,000 metric tonnes in the country, only 110,000 mt is collected for use" -- and that too by the cosmetics and pharmaceutical industries.

He attributes the scattered growth of the neem tree to a collection level riddles with ignorance and incompetence. "Being a source of natural medicine in rural India, and given the hardy nature of the tree to come up in gullies and ravines, thee had never been a coordinated effort to encourage the growth of the tree."

However, H M Behl, of the National Botanical Research Institute, Lucknow, says that entrepreneurs stand to make a profit of only 10 per cent the above figure "from a 25 ha plantation which has 1,000 trees per ha," since the grower rarely debuts directly into the international market.

Atul Garg, a Bombay-based entrepreneur who is keen on investing in neem, says that these conflicting figures, compounded by a lack of information regarding entry to the international arena, had cold-storaged any developmental plants. "I haven't been convinced that this is a sound venture. If, at the end of it all, I have to cut down trees to sell them as timber or firewood, it'll be a complete waste," he says ruefully.

Then, of course, the ogre of plant patenting could put paid to the best of intentions. Along with the International Federation of Organic Agricultural Movements, a delegation of members of the European Parliament which visited India in early May threatened to file an objection at the European Patent Office, which had granted in September 1994 the patent for a neem extract to the American firm W R Grace. Their visit here caused not a ripple in the Indian Parliament.

So the tree, whose scientific name Azadiracta indica is derived from a Persian term Azad darakh ("free tree"), might not remain free for very long.