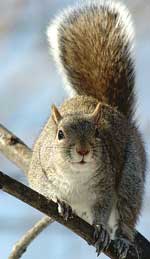 humans are more prone to cancer because of their body mass. However, nature has protected us somewhat from this risk by disallowing the secretion of an enzyme that rapidly heals damaged cells but promotes cancer. Telomerase, the enzyme which is not normally found in humans, is found in abundance in mice. It was earlier believed that telomerase expression was linked to lifespan and the enzyme expressed itself in animals with shorter lifespans and absent in ones with longer lifespans.

Evolution has ensured that the period for which an organism is alive has little effect on how some of its cells might mutate into cancer, says that paper published in the December 6 issue of Aging Cell. The tips of chromosomes, called telomeres, shorten every time a cell divides. After about 60 divisions, the telomeres are eroded away to the point that the cell stops dividing.Telomerase rebuilds those tips, so animals that express it, like mice, have cells that can reproduce more extensively and thus heal better. But this also increases the risk of cancer. Cancer cells constantly reproduce unchecked.

Recent studies have reported that telomerase is activated in most human cancers, whereas it is not detected in most somatic cells. These findings indicate that the positive telomerase activity is closely related to the malignancy potential of human tumours. In several types of human cancers it is very difficult to predict this potential using conventional methods. Telomerase activity may in future be the method of predicting malignancy.

Vera Gorbunova, assistant professor of biology at the University of Rochester, investigated 15 rodents from across the globe to determine what level of telomerase activity each species expressed, to see if there was some correlation. The species ranged from tiny field mice to the 100-pound capybara from Brazil. Lifespans ranged from three years for the mice, to 23 or more for common backyard squirrels.

For over a year, Gorbunova collected deceased rodents from around the world. She analysed their tissues to determine if the telomerase was fully active in them, as it was in mice, or suppressed, as it is in humans. Rodents are close to each other on the evolutionary tree and so if there were a pattern to the telomerase expression, she should be able to spot it there.

She found no correlation between telomerase and longevity. The best example that disproves the correlation was the common grey squirrel, which has a longevity of two decades, yet demonstrates telomerase activity.

Body mass, however, showed a clear correlation across the 15 species. The capybara, nearly the size of a grown human, was not expressing telomerase, suggesting evolution was willing to forego the benefits in order to rein in cancer.