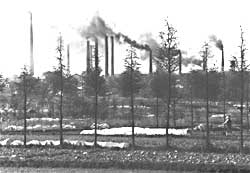 The World Bank's report on the environment in East Asia says that disease and death will increase steeply among China's city dwellers unless the country tackles its growing air pollution.

The report claims that if urban air pollution continues to grow at current rates, the number of premature deaths in China will increase from 218,000 to 850,000 a year, cases of chronic bronchitis from two million to 7.4 million and bouts of respiratory symptoms from six billion to 22 billion by the year 2020. The report, based on research and statistics from the Chinese governments and independent research institutes, says that China must invest now in clean engine technologies for cars and less polluting fuels for heating or face a crisis early next century.

Although its large industries and power plants, which heavily rely on coal, are decreasing their emissions of particulate matter or holding them steady, emissions from domestic cooking and heating fuels in cities are increasing. Levels of suspended particulates and sulphur dioxide in Chinese cities rank among the highest in the world. In cities like Beijing, Shanghnai, Guangzhou, Chongqing, Harbin and Chengdu particulates from coal burning cause more than 50,000 premature deaths and 40,000 cases of chronic bronchitis a year. "The biggest problem in China is the state-owned enterprises. They will have to be restructured, privatised or closed down and the social costs will be enormous, so it will be not overnight," says Richard Ackermann, the World Bank's environmental manager for Asia and a joint author of the study.

The World Bank says that the problem could be greatly reduced by investing about one per cent of the country's annual gdp in reducing pollution over the next 25 years. It says that China should use cleaner coal and rely more on gas, as well as introduce stricter maintenance programmes for vehicles, lower the sulphur content of fuel, introduce clean engine technology and use liquefied petroleum gas instead of coal.